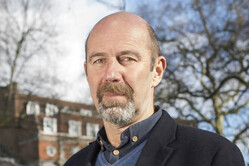 In a surprise move, Norman Howell, Formula One's director of communications, has stepped down.

Howell, a thirty-year veteran of PR and communication strategies, and who reported directly to commercial boss Sean Bratches, was first recruited by Bernie Ecclestone in 2003, but subsequently left to become editor in chief of the Red Bulletin, the sports magazine owned by energy drinks giant Red Bull.

In the 1990s he was appointed head of communications at McLaren and along the way since then he has enjoyed a stint as communications director for FIA - attempting to fill the shoes once so eloquently worn by the legendary Richard Woods - as well as a similar role at UFC (the Ultimate Fighting Championship).

When re-recruited by Formula One Management, just weeks after Liberty Media's purchase of the sport, it was with much fanfare, Bratches stating he was "pleased to name Norman as Formula One's new director of global communications.

"As we embark on an exciting new chapter in Formula One's history, Norman brings a wealth of knowledge and perspective to the newly enhanced leadership team," he added.

"His extensive and demonstrated experience leading communications strategies for many of the world's most prestigious motorsport brands, together with his background as a journalist and social media specialist, align well with our objectives to broaden Formula 1's appeal and proactively engage the marketplace to elevate the exciting changes that we are envisioning and implementing."

Howell, who began his career as a journalist with the Sunday Times, said he was "delighted" to take on the new role, adding: "Formula 1 has an exciting and innovative vision for the sport. We want fans to get closer to the action on and off the track, with new levels of entertainment and engagement. If we can do this, Formula 1 will continue to be one of the biggest sporting brands in the world."

While his appointment was loudly trumpeted, not so his departure, which, ironically, hasn't even been deemed worthy of a press release.

Indeed, news of his departure, according to Forbes, comes courtesy of a post on Howell's Linkedin profile, which states he has "now left Formula 1 after covering the digital and communication roles through the transition from Bernie Ecclestone's FOM to the present ownership of F1 by Liberty Media.

"I will take a short break and some thinking time before plunging headlong once more into the very exciting and ever-changing world of content communications," he adds.

It further shows that since mid-December he has been a media consultant for NHH Media, which appears to be his own company.

The last time his name appeared on an FOM press release - not that Pitpass receives them directly - was 6 December in relation to the revelation that F1's eSports series had 4.4 million viewers in 2018 across television and streaming channels, the two subsequent releases - including that reporting the 2018 race attendance figures do not bear his name.

The question is, did Howell resign in order to focus on his own business or is FOM replacing him? Certainly what clouds the issue is that his departure hasn't been officially announced nor a replacement named.