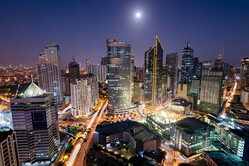 Just months after confirming that F1 will head to Vietnam in 2020, it appears the sport has plans for another event in South East Asia.

The Independent reveals that on 7 January, F1 filed trademark applications with the Intellectual Property Office of the Philippines for the 'Philippine Grand Prix' and 'Manilla Grand Prix'.

While there is a long way to go before we can expect to see cars racing on the streets of Manilla, trademarking the event name is an important first step in the process.

In November 2017, F1 applied for the name 'Formula 1 Grand Prix of Miami', six months before it was revealed that talks to host a race in the Florida venue were announced.

Earlier this month, AKK-Motorsport, Finland's national motorsport authority, announced that it had launched a study to assess whether the country could host a Grand Prix, an application for 'Finnish Grand Prix' and 'Helsinki Grand Prix' having been registered last August.

A Philippines Grand Prix however comes as a bit of a surprise, not only because there has never been any serious talk of a race there before, but because such a move is hardly likely to please the organisers of the Vietnam Grand Prix considering Hanoi and Manila are just a thousand miles apart.

Though Miami is looking increasingly doubtful, Formula One Management is still seeking to expand the calendar, for more races not only means more TV viewers but more hosting fees, and with these averaging £23.3m ($30.3m) one can understand why.

While the calendar currently stands at 21 races, FOM has made no secret of its desire to add more, though speaking last year world champion Lewis Hamilton admitted that he would draw the line at 24.

"I am not going to be here if it gets to 25 races, that's for sure," he told reporters. "It already feels like we are on race number 25 this year, so I don't think more races is going to be a good thing.

"I am someone that really loves racing," he added, "but the season is long, it takes a big commitment from all of us, and it is a long time away from our families."

Under the current agreement, in order to increase the calendar beyond 20 races, the majority consent from three teams (Ferrari, McLaren and Red Bull) is required, with an absolute maximum of 25 events. However, more races means greater travel costs and more stress as staff face longer periods away from home.

Next year, the 3.1 mile Pradera Verde Racing Circuit, on the outskirts of Manila, is due to open.

Backed by Rallycross boss Rodolfo Pineda and designed by Hermann Tilke, the circuit is part of a complex which also includes a golf course, wakeboard park, hotel, and dirt track where Philippine Rallycross Series events are held.

Meanwhile, as F1 looks increasingly to South East Asia, Silverstone, home of the first ever round of the Formula One World Championship, has yet to secure a deal after this year's British Grand Prix which takes place in July. This at a time China is set to host the one-thousandth round in just a couple of months.

Somewhat ironic when one considers the sport's global research director Matt Roberts' recent comments. "We need to think strategically about where new races are (and whether they are street or circuit races) to not alienate fans in our traditional markets who expect there to be circuit races in Monza, Silverstone and Spa," he said in an AME event on Reddit."

And let's not forget Liberty CEO Greg Maffei's Bernie-bashing comment, when he bemoaned the fact that "we end up with races in places like Baku in Azerbaijan, where they paid us a big race fee, but it does nothing to build the long-term brand and health of the business".

Fact is, Ecclestone, who rejected an offer from Vietnam understood to be greater than that subsequently accepted by Liberty, had previously looked at a race in the Philippines after Red Bull co-owner Chalerm Yoovidhya recommended it.