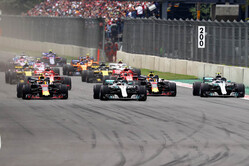 Having created a simulation aimed at assisting with the design (and re-deisgn) of tracks in a bid to improve the racing, it has been revealed that a sim has also been created to try alternative grid formations.

Over the years a number of different layouts have been tried, but for long as anyone can remember the current staggered two-by-two format has been the preferred option.

However, in its bid to improve 'the show', and mindful of the fact that a race can often be decided by the first corner, F1's technical team has been looking at alternatives.

Having previous revealed that the sport was considering using eSports in a bid to find an alternative to the current grid layout, Pat Symonds reveals that a dedicated simulation programme is being used.

"We do want to make our decisions based on evidence," said the Briton. "Over the years we've moved towards this eight-metre, staggered grid formation. We asked ourselves what would happen if we moved the cars closer together and put them side-by-side again... maybe not four and three like they used to be, but two-by-two.

"When you want to simulate something like that, if you just do it as a physics problem you just get a trivial answer," he continued, "if you start cars closer together, and they all accelerate at the same rate, they arrive at the first corner closer together. That's not what you want to know. What you want to know is what's actually going to happen. So, we built a simulation that uses artificial intelligence, but we can also put a human in."

The simulation works by having one car controlled by a human and the remaining 19 controlled by AI, in a series of "fifty races of two laps".

This allowed F1 to "statistically analyse every single position of the cars at all times, so we can say 'when we did this to the grid we got 3% more accidents, we got 5% more passes, we got 20% more side-by-side racing'".

Claims that the simulation suffered a major malfunction when reprogrammed to include grid penalties and even grid girls have been firmly denied.