Finally, someone gets it 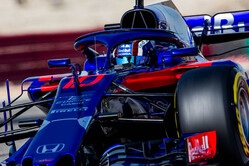 Like most other sports, indeed politicians, the media and global corporations, the powers-that-be in F1 are adamant that they know best, paying little more than lip-service to those armchair experts called fans.

However, for as long as anyone can remember, fans have been pointing out the obvious to the sport's powers-that-be, namely that F1 relies too heavily on aerodynamic grip as opposed to mechanical.

The argument used to be that the rear wings, in particular, were billboards, invaluable to prime sponsors, while in recent years the architecture witnessed on the front wings has taken on a life - and art form - all of its own.

In its effort to improve the racing the sport has made numerous attempts to improve the situation, but just like the regulations being introduced this season, very soon the engineers are on top of things and the status quo is maintained.

Throughout the numerous changes however, there has been one constant, be it courtesy of blogs, forums or 'letters to the editor', the call from fans for less reliance on aerodynamic grip and more reliance on the mechanical variety. (That, and a return to Cosworths and V12s... among other things).

"We have so much downforce, which means high corner speeds, no one can follow because of the dirty air behind and we have hardly braking zones," the Austrian tells Motorsport.com. "How should you overtake?

"The FIA, FOM, and there are the experienced people over there, like Ross Brawn, like Pat Symonds," he continues, "they know exactly what you should do: to come down with aero side, with the downforce.

"I would cut minimum 40-50% of the current downforce, to make the car much more unstable in the corners," he admits. "Then people see that drivers have to fight with the car. Cars will be much faster on the straight, you have chances to overtake someone – because of [increased] braking – and you can follow in the corners. This regulation could be easy to be realised. They just have to want it."

However... and in F1 there is always a however... he admits that such a move is unlikely.