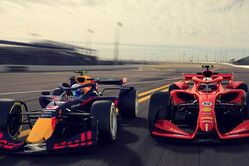 Not for the first time, no sooner has the sport moved to 'improve the show' than the teams various technical gurus have admitted that the changes will make little difference. Indeed, as teams were working on their 2019 cars, they were already looking at how they might claw back any lost performance in a bid to maintain the status-quo.

As a result some are already warning that the effects of changes being implemented will have been nullified by the time the European season gets underway.

Determined to improve 'the show' by allowing cars to follow one another more closely and thereby improve the chances of overtaking, the sport's technical boss, Ross Brawn has admitted that if the planned changes don't make a difference further changes could follow.

With the current Concorde Agreement coming to an end in 2020, 2021 has always been the benchmark since Liberty Media bought F1 at the beginning of 2017, and with a major overhaul of the look of the cars planned for 2021, Brawn sees next year's changes as the first step.

"What we learn from this aero programme will be very important for the next bigger step, in 2021," Brawn tells the official F1 website. "The point to stress is it's a philosophy and a culture, not just a one-stop solution.

"If we don't achieve everything we want to achieve with these changes, we'll learn from it, press on and carry on with the next phase of changes and we'll keep doing that until we get the cars in a form when they can race each other much more effectively, which they can't at the moment.

"It's useful to see if the teams have been able to evolve and take different directions because we don't want to discover that in 2021," he admits.

"Until the cars run, we don't know what solutions they have made, but from predictions, we're achieving about 20% improvement," says the Briton. "So we're about a quarter of the way there to where we think we could be. But it's not a one-stop shop in the sense that you do this and then you don't touch it anymore."

Looking ahead to 2021, F1 has previously issued a number of images of its idea of how the new generation of F1 car (pictured) will look, the powers that be admitting that the futuristic, Hollywood concept, machines are intended to look so good 'kids will want to have posters on their walls', though fans of a certain age will be aware that until not that long ago - before the rules decreed that all the cars should look the same - a million bedrooms, studies and offices featured pictures of the sport's most iconic machines.

Nonetheless, as Brawn and his technical team continue their 2021 programme, the World Motor Sport Council has confirmed that teams can run unrestricted simulations on the development of 2021 cars, under the watchful eye of Brawn and the FIA.

"The FIA and ourselves have issued a framework of what the car could be like with tasks for each team to look at aspects of it," says Brawn. "It's not enough for teams to go off and start designing a car, we're purposefully trying to hold back on that.

"The teams will have about a year or so to work on the designs of these cars, I think that's the right sort of timescale. Once they've designed their 2020 cars, they need to be able to focus on 2021.

"Whenever you introduce fairly major conceptual change in the regulations, the opportunity exists for a team to devote its resource to that project and leapfrog a year - accept where it is and that it might not be the greatest year - in favour of jumping up to where they want to be the following year," said Brawn, whose own team won the world championship in 2009 after McLaren and Ferrari fought a bitter title fight in 2008 which saw them fully focussed on that year's cars until the bitter end.

Of course, those teams with money have the resources to be able to run a number of parallel programmes, a luxury not available to those existing on a smaller, limited budget. Yet, at a time F1 is supposedly looking to reduce spending, every single rule change increases costs, even to the point that the big teams are concerned.