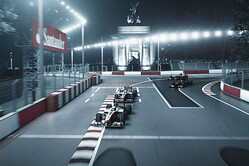 When Chase Carey and Sean Bratches insist that they see the future of Formula One comprising races in the world's "destination cities", the word "outskirts" is never included.

However, as they realise that a Grand Prix on the streets on central London is nigh impossible, F1 technical boss Ross Brawn reveals that a race on the outskirts of the city is being considered.

"I think because F1 is a week-long activity minimum, the disruption it would cause in the centre of London would be unacceptable," he tells the Evening Standard.

"London is an iconic city with a massive history in the sport and there's huge enthusiasm here," he continued, adding: We'd like to see London complement Silverstone, not replace it. We could see ways we could make it work both sides."

A spokesman for Sadiq Khan, the Mayor of London, subsequently confirmed that talks were ongoing.

"The Mayor believes that it should be possible to organise a race in London in the future and has asked his team to explore options with F1," they said.

As it stands, next year's race at Silverstone is the last, with circuit owners, the British Racing Drivers' Club, having exercised a clause which brought its 17-year contract to an early end having finally realised that it simply couldn't afford the ever-increasing hosting fee.

Though F1's powers-that-be insist that they want to see Silverstone remain on the calendar, in addition to being unwilling to reduce the fees - a move that other race promoters would seize on - they have made no secret of their desire to take the sport on to the streets of the capital.

Earlier this week we revealed that a high level source, significantly active in the highest echelons of British motorsport, and certainly not someone given to spurious or fictitious claims, has admitted that the BRDC is considering a deal whereby the money from ticket sales is handed direct to Formula One Management, which in turn hands the club a fee for running the event.

Meanwhile, if an event on the outskirts of London is truly being considered, might one suggest... Stevenage.