Verstappen to give RB15 its testing baptism 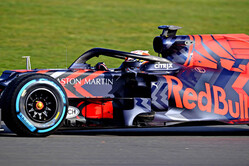 Max Verstappen, who gave the RB15 its shakedown earlier this week, will also be first to run Red Bull's 2019 contender in real anger when he gets testing underway on Monday.

Over the first four days of pre-season testing the Dutchman will alternate with Pierre Gasly, the Frenchman getting his first taste of the car on Tuesday before handing it back to Verstappen on Wednesday.

On Thursday, the final day of the first round of testing, Gasly will be back in the RB15.

Meanwhile, at Haas, Romain Grosjean will get proceedings underway on Monday before handing over to Kevin Magnussen on Tuesday.

Wednesday and Thursday however sees Pietro Fittipaldi in action, the Brazilian taking over from Grosjean on Wednesday afternoon, and then driving on Thursday morning before handing the car over to Magnussen for the final afternoon.