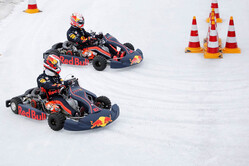 The off-season is long and tedious, especially for two young impatient F1 drivers like Max Verstappen and Pierre Gasly, so their team organised a little distraction by taking them to a speed skating track in the Netherlands where the Dutch driver's old kart team was hard at work prepping a couple of karts for the ice.

Starting the season in true Red Bull style, both drivers quickly got to grips on the narrow 3km ice track with some impressive power slides, donuts and Scandinavian flicks.

"It was a lot of fun," said Verstappen afterwards. "It was the first time ice karting for me and it was actually pretty quick. I think at one point we were going over 100, in sixth gear, so it was great. If I was to rate my drifts, I'd give myself an eight.

"This has been one of the most fun activities we've done," he added, "there have been a few really good ones but this is definitely one of the best. I had a lot of fun today with Pierre and it was a great way to start the season together."

Gasly was equally enthusiastic, and a little bit surer of his skills, rating his drifts at 10 out of 10. "There were a few nice moments with Max, just drifting side by side. It's really different to what we would normally do on a proper track with an F1 car, so it's cool to experience this kind of thing.

"I love competing and when I was racing in the World Karting Championship and the European Championship, the adrenalin and competition made it super exciting, but this was more of a fun day and it was great to do this with Max.

"Now I guess I should find something fun for him to do when he comes to France."