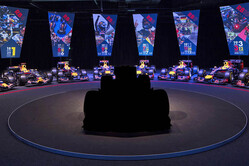 Red Bull is to launch its 2019 contender, the RB15, on the same day that Mercedes reveals its car and Racing Point unveils its new identity, February 13.

2019 is a major year for Red Bull, for it sees the beginning of a new partnership with Honda, which currently supplies sister team Toro Rosso.

The Austrian team also has a different line-up with Max Verstappen joined by Pierre Gasly.

Details of the unveiling are sketchy but it is likely to follow the example of its sister team with a low profile online reveal.

Keen to put its bitter relationship with Renault firmly in the past, Red Bull has spent much of the winter talking up Honda, thereby giving pre-season testing, which gets underway just five days after the February 13 reveal, additional meaning.

Renault, which has secured the services of former Red Bull star Daniel Ricciardo, launches its car a day earlier on February 12.

With Haas having announced that its new livery will be unveiled on February 8, Williams remains the only team yet to make some form of announcement.