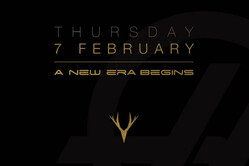 Haas, which has a title sponsor in the form of Rich Energy this season, is to unveil its new livery on February 7.

The American team goes into its fourth season with a title sponsor for the first time, in the form of energy drink Rich Energy, though there remain serious doubts as to whether the company has the requisite funding, the people behind it previously linked with a buy-out of Force India which eventually came to nothing.

Rich Energy was subsequently courted by Williams, the British team seeking a replacement for Martini. Despite rolling out the red carpet for its CEO William Storey at Austin, in a shock move he subsequently informed the Grove outfit that he had opted to partner with Haas.

The Rich Energy deal will see a livery change for the team incorporating the black and gold of the company's colours, while the team will race as Rich Energy Haas F1 Team.

The American outfit, which finished fifth in the 2018 standings, is looking to pick up where it left off last season, opting for continuity by retaining its line-up of Romain Grosjean and Kevin Magnussen for a third successive season.

Benefitting from its close ties to Ferrari - a source of major irritation to several rivals - Haas, like Sauber, was given a further boost last year by the engine upgrades introduced over the course of the season. Despite the concerns at the close ties with Maranello, which included much of the Ferrari rear end, the FIA insisted all was above board.

However, a topsy-turvy season for both drivers, combined with a number of other totally unnecessary errors from the team, saw the American outfit fail to fully capitalise and ultimately lose the fourth sport to Renault.

Failure to abide by the rules over the legality of its floor cost Grosjean sixth place in Italy, while at the team's home race Magnussen was disqualified for using too much fuel after the Dane had finished eighth. In total, the team's mistakes cost at least 22 points.

Of course, the drivers didn't help, certainly in Grosjean's case. Where to begin? The crash behind the safety car in Azerbaijan? The kamikaze attack on the entire midfield in Spain? The numerous incidents at his home race - where he tangled with countryman Leclerc - or the clashes with Sainz and teammate Magnussen at Silverstone?

In Singapore the Frenchman was rightly penalised for his flagrant ignoring of the blue flags, while another encounter with Leclerc - this time in Austin - saw the Frenchman come dangerously close to a second race ban.

Yet there were some typically strong performances also, Austria, Germany, Italy and Japan being the examples that spring to mind.

Curiously, while Grosjean had a poor start to the season, improving in the second half, it was exactly the opposite for Magnussen, who started the season well but then inexplicably faded away.

Bouncing back from the disaster that was Melbourne, Magnussen gave himself and his team the ultimate confidence boost by finishing fifth in Bahrain and claiming sixth in Spain just a few weeks later.

However, a strong mid-season spell was followed by an inexplicable lean period in the second half of the year when there were times one wondered if Kevin was still racing.

Other than his unexplained loss of pace in the second half of the season - during the races and in qualifying - over the course of the year Magnussen was once again embroiled in a number of questionable incidents with rival drivers. Also, at a number of races, not least Monza and Singapore, he was inexplicably off his teammate's pace.

That said, the Dane's two DNFs were not down to him, and over the course of the year he showed impressive consistency.

If ever the phrase "could do better" applied, it would do so not only in terms of Haas but its two drivers, both clearly have potential but simply weren't consistent last year.

Meanwhile, the team must learn from its mistakes. Ignoring the unsafe releases in Melbourne, the floor saga was a fiasco, and played into the hands of its rivals, particularly Renault.

Though the American team is clearly improving year on year, it will face tougher competition from the likes of Renault, not to mention Alfa Romeo (Sauber) and whatever Racing Point finally decides to call itself.

Despite its close relationship with Ferrari, 2018 saw Haas show the first signs of a political stance, and not one that fits with the Maranello narrative. Team owner Gene Haas referred to those teams outside the Mercedes/Ferrari/Red Bull bubble as Formula B, while Guenther Steiner admitting that unless F1 is overhauled and the playing field truly levelled he doesn't see the point of remaining in the sport.

While initially looking to use his cars to promote his own CNC machine tools, in the last couple of seasons Gene Haas has seen a number of sponsors adds their decals to his cars, including Menswear brand Jack & Jones, Peak coolant and anti-freeze, a luxury Swiss watch maker and an online bookmaker.