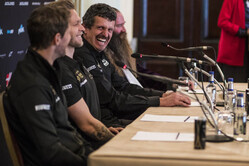 Throughout 2018, other than its failure to adhere to the rules in terms of its floor, thereby giving Renault the perfect opportunity to lodge a protest in Monza and halt its rival's progress, Haas found itself under attack from other rivals in terms of its close relationship with Ferrari.

Other than the power unit, the American team uses a number of vital components supplied by the Maranello outfit, including much of its rear end, and despite the objections of rivals, the FIA gave the relationship a clean bill of health.

However, as Alfa Romeo, part of the Fiat Chrysler Automobiles group of which Ferrari is a 'sister' company, establishes its presence on the grid, Haas team boss Guenther Steiner insists he is not concerned that his team will lose out.

"We've got a very solid relationship with them, technically, humanly, financially," he said. "We've worked together now for three seasons, but it's more than three seasons because we worked before with them for years, four or five years almost, so we are very solid with them. They respect us, we respect them. We collaborate very well.

"What they do with Sauber, or with Alfa Romeo, sorry, is none of my business," he added, "and they know that I respect that fully, I don't interfere. As long as we get what they promised and what they give us, and they do, I'm happy.

"What they do otherwise, so be it. I'm not critical or anything, and I don't really care actually what they do with them, as long as we do what we always do, and we do. So I'm happy."