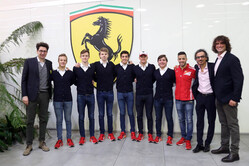 Member of the Ferrari Driver Academy (FDA) gathered in Maranello today for their first day of work for the 2019 season. Among them was new recruit Mick Schumacher, just back from the Race of Champions in Mexico City.

Management and drivers then posed for a photo with 'older brother' Antonio Fuoco, remains with the FDA in a consulting role, while Marcus Armstrong is in New Zealand in the Toyota Racing Series.