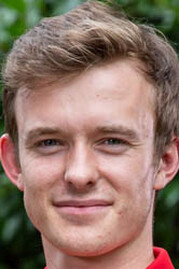 Callum began in karting aged 9, and within a couple of years was making his mark, winning the Formula Kart Stars in 2011 and finishing third in the German Junior Karting Championship, both in the KF3 class.

In 2012, he remained in KF3 with the Chiesa Corse Team, going on to win the WSK Masters Series and WSK Final Cup, as well as finishing runner up in the WSK Euro Series and CIK-FIA World Cup. No surprise then that he was selected youngest ever WSK Driver of the Year.

In 2013 he raced in both the KF2 and KF classes, winning the KF2 the 42 Trofeo delle Industrie and the WSK Final Cup in KF.

In 2014, now with Zanardi Strakka Racing, he finished fourth in the CIK-FIA World Championship, third in the WSK Champions Cup, and won the WSK Super Masters Series and CIK-FIA European Championship.

For 2015 he made the switch to single-seaters, contesting the Toyota Racing Series New Zealand with ETEC Motorsport and the FIA European Formula 3 Championship, though still only 16.

Before making his F3 race debut, Callum tested F3 and Formula Renault 2.0 cars in a bid to gain experience, and based on this experience he went inot his maiden season as one of the favourites. Indeed, it was at this time also that Callum was recruited to the prestigious Red Bull Junior Team.

Finishing 16th in the Toyota Racing Series and 12th in European Formula 3, he remained in F3 for 2016 though moving to Van Amersfoort Racing where his teammates included Harrison Newey and Anthoine Hubert.

The youngster claimed his first victory in the second race of the first round at Circuit Paul Ricard, and a second win at the Red Bull Ring, going on to finish 6th overall.

Incidentally, it was at the opening round at Paul Ricard that Nikita Mazepin made the headlines after hitting Callum in the face after he felt the British driver had blocked him.

In late 2016, alongside testing a GP2 car with ART Grand Prix in Abu Dhabi, Callum was confirmed at Prema Powerteam for the 2017 season, the youngster finishing fourth overall courtesy of six wins and six podiums. Callum also found time to make his F2 debut, contesting the Silverstone rounds with Trident Racing.

Having failed to win any races in his rookie season, Callum was dropped by Red Bull at the end of 2015 just months after being recruited, however, at the end of 2017 he was picked to join the equally prestigious Ferrari Driver Academy.

In 2018 he raced in GP3 with Art Grand Prix, ending the season third overall, behind teammates Anthoine Hubert and Nikita Mazepin.

At season end he took part in the post-season F2 test, driving for both the Trident and Charouz Racing System teams.

It was with Charouz, albeit Sauber Junior Team by Charouz, that Callum contested the 2019 F2 season, going on to finish 11th in the overall standings having scored podiums in the sprint races at Catalunya and Sochi and his maiden pole at Monza.

It was in 2019 that Callum made his F1 debut, the youngster completing 41 laps for Alfa Romeo at the in-season test at Barcelona before crashing.

Taking his maiden F2 win at the season opener in Austria, Callum went on to score two more wins and three podiums and went into the final round runner-up, just 14 points adrift of championship leader, Mick Schumacher.

While defending from Callum as they fought for the lead - and title – however, Schumacher flat-spotted his tyres and consequently was forced to pit. However, as a result of his similarly aggressive performance, Callum also had to pit and subsequently slipped out of the points.

Though Callum finished 10th and Schumacher 18th, the German claimed the title by those same 14 points.

Due to make his FP1 debut at the Nurburgring, the cancellation of the day's sessions due to the weather meant that Callum had to wait until the post-season test when he drove the Alfa Romeo.

It was following the post-season test that Ferrari announced Callum as its test driver for 2021.