Ferrari president dismisses talk of of unrest and restructure 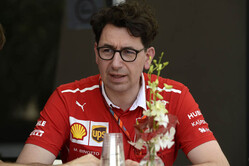 While the news that Maurizio Arrivabene was leaving Ferrari was roundly seen as a good sign, the 'promotion' of technical boss Mattia Binotto to the role of team principal was not.

Having done a superb job in turning the technical side of the team around since being promoted to the role of Head of the Power Unit and then Chief Technical Officer, following James Allison's departure, the general consensus was that the Italian should remain in place as technical boss.

Instead, he takes the role of Team Principal, replacing a man, who prior to taking the role at Ferrari, was an executive for a cigarette manufacturer.

In short, Binotto should have been left where he was while the team sought a dedicated team principal, experienced with the running of an F1 team and able to deal with the various other aspects of the role, including the politics.

Amidst talk that Ferrari is seeking to reshuffle its technical department, which has led to speculation of general unrest within the team, company president John Elkann has taken the unprecedented step of publicly denying the claims.

"I read with surprise words and opinions attributed to me about Ferrari," he writes in an open letter to Gazzetta dello Sport, "but that have never been said and do not reflect my thoughts.

"I feel obliged to clarify some points, for the benefit of readers and in respect of the truth," he continues. "The appointment of Mattia Binotto to team principal of Scuderia Ferrari does not represent 'a turnaround' in management and does not arise from alleged disagreements within the team. On the contrary, it was a choice decided by the company in agreement with Maurizio Arrivabene, who has worked tirelessly in the four years of work in that position to turn the Scuderia back to the levels of competitiveness it deserves.

"The work of Mattia, which has already begun in anticipation of the season that is about to start, rests its foundation precisely on what has been done in recent years. It is a line of continuity that aims at evolution, certainly not a 'rupture' compared to the past."

Referring to claims that former team boss Stefano Domenicali, now CEO at Lamborghini, might be brought back to Maranello to replace CEO Louis Camilleri, Elkann adds: "I reject any rumour or imagination that suggests returning to the past and further changes in our structure.

"My commitment to ensure stability and concentration to Ferrari is total, as is that of the CEO Louis Camilleri. Together, and with the contribution of all the women and men of Ferrari, we will reach the goals that we presented publicly a few months ago from Maranello."