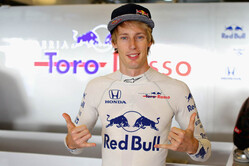 Brendon Hartley and Pascal Wehrlein are among the four drivers named as simulator drivers for Ferrari this season.

The four drivers will work in the Scuderia Ferrari simulator throughout the 2019 season, thereby contributing, alongside race drivers, Sebastian Vettel and Charles Leclerc, to the development of the car.

Other than Wehrlein and Hartley, the other two drivers are Antonio Fuoco and Davide Rigon.

Hartley joins Ferrari after racing for Toro Rosso from the 2017 US GP until the end of the 2018 season. He also has a solid background in endurance racing having been FIA WEC World Champion twice (2015 and 2017) and also won the 2017 24 Hours of Le Mans.

Currently driving in Formula E for the Mahindra team, Pascal Wehrlein competed in Formula 1 in the 2016 and 2017 seasons having been crowned DTM champion in 2015, unable to find a way back to F1, last season he ended his long association with Mercedes.

Fuoco has been part of the Ferrari family for his entire career through his time in the Ferrari Driver Academy and joins the simulator team after an excellent season in F2 that included a superb win in Abu Dhabi.

Rigon is a Ferrari simulator veteran. He has been driving the simulator since 2014 in addition to his work as an official driver in GT competitions. Amongst other categories, he has been racing for AF Corse Ferrari in the FIA WEC for many years and has won four world championship races with the team.

"Our team has taken on four undoubtedly talented drivers, who possess innate feeling, with a strong understanding of race cars and tracks," said Mattia Binotto. "These are exactly the qualities required in the skilful role of driving in a simulator, one of the vital pieces of equipment in the Formula 1 of today."