Qualifying... the ultimate thrill in F1 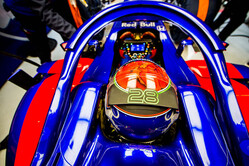 It's only right that Brendon Hartley will look back on his time in F1 with mixed emotions, for while clearly bitter at the actions of some, he remains moved by the loyalty of others particularly his crew, Honda and the fans.

The kiwi joins a growing list of drivers discarded by the Red Bull/Toro Rosso machine, drivers like Scott Speed, Sebastien Bourdais, Christian Klien and Daniil Kvyat, however, other than the loyalty of those previously mentioned, there is one positive that Hartley has taken from F1 and will forever live with him, the pure thrill of qualifying.

"When people ask what's the most impressive thing about F1, I normally mention qualifying," he tells the official F1 website. "Of course, there are thousands of things I could mention, including the engineering and technology, but as a driver the sensation in qualifying is hard to put into words.

"The 100-kg fuel tank is emptied to all but fumes as you cross the finish line, engine turned up to 11, aerodynamics and downforce settings maximised and sticky tyres that have one lap of pure performance.

"It takes a lifetime of preparing and honing your skills to put an F1 car close to - and sometimes over - its limits in qualifying. That's the feeling I will never forget, and one I know I'm privileged to have in my memory bank.

"F1 cars broke most track records in 2018 and with constant regulation changes it's possible F1 will never be as quick again.

"Another way I try to describe the forces to people is through load on the neck. We are pulling around 5 Gs every time we hit the brake pedal and yank on the steering wheel, that's equivalent to about 35 kilograms of force on the head with each movement.

"It's only the long straights that we get a chance to breathe, although there are gear changes and the thousands of potential setting changes (via buttons and rotaries on the steering wheel) to adjust, which fill that time up pretty quickly.