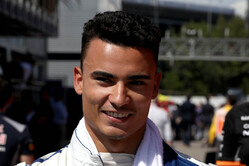 Not for the first time this year, Pascal Wehrlein has had to wait on being given the medical green light before getting into his Sauber.

Following his Race of Champions crash in January, the German was initially prevented from taking part in the first week of testing and subsequently ruled out of the opening two rounds of the championship when it was revealed he had cracked a number of vertebrae in the crash.

During last weekend's Monaco Grand Prix, which came two weeks after the German scored Sauber's first points of the season, Wehrlein was involved in a bizarre incident in which it was thought he might have aggravated his previous injury.

Duelling with Jenson Button at the back of the field, the Briton made a move on the German in Portier which resulted in the Sauber being flipped on its side perilously close to the barriers.

Taken to the Medical Centre following the incident the German was given the all-clear following his initial investigation however due to his previous thoracic vertebra injury a further medical investigation was scheduled for later in the week.

This morning Wehrlein and his team took to Twitter to announce that he had been given the all-clear.

Jenson Button, who had announced that Monaco was his last race, was handed a grid penalty for causing the crash.