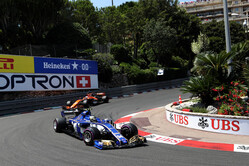 Despite the fact that today's Monaco Grand Prix was a one-off and he has no intention of returning to the sport, Jenson Button has been handed a 3-place grid penalty following today's clash with Pascal Wehrlein.

Race fans held their collective breath today when the cameras cut to Wehrlein's car which was on its side against the barriers at Portier, just before the entrance to the tunnel.

When the team asked if the German was OK, there was an agonising wait before he eventually replied that he was, but unable to get out of the car because it was against the barriers.

As the marshals righted the car and the German climbed free, the Safety Car was deployed.

Replays showed Jenson Button, who had been behind the Sauber for much of the race, try to pass on the inside at Portier, hitting Wehrlein in the process and flipping his car on its side.

The stewards heard Button explain that he believed that after Wehrlein gave way to the Ferrari of Sebastian Vettel which had just lapped him, the Sauber had lost momentum and that going into Turn 8 Wehrlein was also going to be on the dirty line.

Wehrlein explained that he was in fact back on the racing line, at normal speed, and that he did not see Button move to the inside as he was not expecting it.

Having reviewed all the angles on video, the stewards concluded that Wehrlein was on the racing line, and that the move Button made was unlikely to result in a clean pass.

The stewards did not consider the consequences of the collision which resulted from Button trying to brake at the last moment and Wehrlein's interlocked wheel causing the car to turn on its side.

The stewards determined that Button was predominantly to blame, under Article 38.2a of the Sporting code and caused the incident, and therefore applied a 3 grid place penalty to the Briton for his next race and two penalty points.

"His tyres were completely gone from lap one," said Button of Wehrlein, "I know because I had the same set of tyres on from the start of the race after I pitted just after the start.

"I had a lot more traction coming out of the previous corner, because when these tyres go on the marbles they have no grip. I thought I was a long way up the inside and then I looked across and saw that he hadn't seen me, so I tried to back out, but obviously it was too late by then.

"You do struggle to see in these cars, but you don't think in that moment that the guy's not going to see me when you go up the inside. I gave it a go and thought it was a fair enough judgment, but it didn't work out.

"You never like seeing a car tip over because you don't know if his head's going to hit anything, but the most important thing is that Pascal is okay - I spoke to him and he's a bit shaken of course but the best thing is he walked out okay."

"He was nowhere, clearly this corner is no place to overtake," insisted Wehrlein. "It was a silly move.

"I touched again the head on the barrier, so I will have to do another scan next week for my back, so let's see," he added, the German having missed the first two rounds of the season following his accident in the Race of Champions in January.

"I could jump out myself, so it seems to be OK. Obviously with the injury I had, I'm not too sure. I remember everything, it was just scary. The brakes started to smoke, I couldn't get out of the car, but the only thing I wanted to do was get out of the car when you see the car starting to smoke."