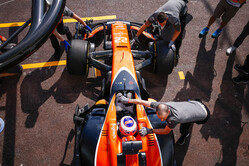 It's fair to say that Jenson Button's one-off return to the F1 cockpit was somewhat marred yesterday by the news that the Briton had incurred a 15-place grid penalty.

The severity of the penalty was made worse when the 2009 world champion qualified ninth, just ahead of teammate Stoffel Vandoorne who crashed at the end of Q2.

The penalty followed the decision by Honda to change the turbocharger and MGU-H on the Briton's car after discovering an issue on Friday following Thursday's opening sessions.

Despite it being the Briton's first (only) race of the year, he carries over Fernando Alonso's components tally and ahead of this weekend the Spaniard was already on his fourth turbocharger and MGU-H.

However, worse is to come, for Honda's Yusuke Hasegawa has admitted that the MGU-H has an inherent fault which means the units are only good for two races.

Following a succession of failures in Bahrain, Honda modified the MGU-H however, Hasegawa admits he is unsure whether the issue is related to the original problem or a new one.

"Every two races we need to change," he told Motorsport.com, "that is not acceptable.

"We think we need to have more modifications for robustness, with the rotating parts especially," he added.

"Currently we are controlling some temperatures or behaviour," he continued. "We can manage the reliability. This time it did OK, but still we are having some issues for reliability.

"After running FP2 we normally check every rotation part - engine, MGU-H - and we saw the MGU-H rotating a little bit odd for a normal situation," he revealed. "It's not completely strange, but the mechanics felt some friction. When we have a complete MGU-H failure, the MGU-H turbine is completely stuck… seized. This time there is not such a problem, but the mechanics could feel some resistance.

"We discussed things with the Japanese side and we decide to change on Friday morning. That is a 100,000 rpm part, and if we feel something strange, it never lasts. It had some chance, but it's not worth it."