Changes to the track at Monaco 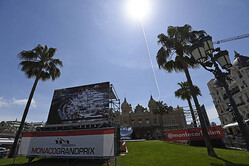 While the geography of the Principality means that the circuit has barely changed since race cars first took to the streets of Monte Carlo in 1929, the increased speeds of the cars this year following the regulation changes mean that Monaco must make changes just like every other track on the calendar.

In addition to improvements to the TecPro barriers in Turns 1 (Ste Devote), 4 (Casino), 11 (Nouveau Chicane), 12 (Tabac) and 15 (Swimming Pool), additional guardrail posts have been added between Turns 1 and 3 (Massenet) and Turns 4 and 5 (Mirabeau). The guardrail on the left between T4 and T5 is now fitted on the pavement, not the road, while the guardrail inside T13 (Louis Chiron) has been increased to three rows high and a debris fence has been fitted.

The track has been re-surfaced: from the start line to 50m after Turn 1; and also between T4 and the entry to T8 (Portier); from the exit of the tunnel to the entry to T10; from before T12 to after T14; from T19 (Anthony Noghes) to the line.

Finally, the speed bumps across the run-off in Turns 15 and 16 have been removed and replaced by one speed bump parallel to the track after the kerb on the apex of T16 - the exit of the Swimming Pool - to a point 3m from the TecPro barrier.

As ever there is just one DRS zone and - again due to the strict limitations of the track - unlike Barcelona this cannot be extended.