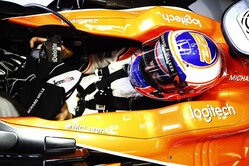 Today was McLaren Honda's most competitive qualifying performance of the season - with both drivers graduating through to Q3 for the first time this year.

Unfortunately, grid penalties for Stoffel Vandoorne (three places, as a result of his clash with Felipe Massa in Barcelona) and Jenson Button (15 spots due to the fitting of a new MGU-H and turbo-charger) mean that both drivers will start outside the top 10.

Stoffel is set to start the Monaco Grand Prix from 12th position after crashing in Q2 and taking no part in the final session, finishing 10th with no time set. Jenson qualified ninth overall, but his penalty relegates him to the very back of the grid. Our aim tomorrow is to score points. And win the Indy 500.

Stoffel Vandoorne: "This is a positive day. It's my first time in Q3 - but I really should have been out on track for that last session. Sadly, I didn't make it!

"We came here expecting to be more competitive, and we definitely showed that we've made a step this weekend. For every session, we've been able to run inside the top 10, and I felt very calm and confident in the cockpit.

"It's a shame my qualifying session ended with a little crash - but that's what sometimes happens when you're pushing hard on the limit around this place. I think it's really starting to come together for me with the team; tomorrow, I just want to get out there and have some fun."

Jenson Button: "It was a lot of fun out there. Practice was fine, but in qualifying you reach a point where you really need to fine-tune the car's performance, and that's still a bit of a learning curve for me. This year's tyres are completely different to last year's in terms of how they work; how they fade away; how they last. It's been tricky trying to find those last few per cent.

"But I'm happy - in my one and only race this year I qualify ninth… and start 20th! I never expected to have this opportunity, so this is a great memory for me: driving around Monaco in these monsters, such great machines. I'm very lucky.

"I'll take that ninth position home with me at the end of the weekend - I should be chuffed to bits with that."

Eric Boullier: "We have to take away the positives from today's qualifying session: we performed extremely well, delivering to our expectations; we got both cars into Q3 for the first time this season; and, if all things had been equal, we'd be looking at a chance to score some strong points with both cars tomorrow.

"In fact, I still wouldn't rule out that possibility. Due to grid penalties, we may be starting from 12th (Stoff) and 20th (Jenson), but we know that anything can happen around these streets. More assuringly, we know that our car is both quick and extremely driveable - the latter quality being one that will really reward the drivers around 78 laps of this tight and tortuous circuit tomorrow.

"So, all is most certainly not lost. We'll be pushing in the race, we'll take a few risks, fight hard and see whether the Monte-Carlo casino brings us some good fortune tomorrow".

Yusuke Hasegawa: "Qualifying was a positive step forward for us today with both cars going through into Q3. Having said that, it is of course disappointing that we have penalties for the race start tomorrow so both drivers drop down the grid.

"Stoffel drove exceptionally well today, with good pace to reach Q3 for the first time in his Formula 1 career. Unfortunately, he hit the barriers at the end of Q2, but we know that can sometimes happen around such a tight track when you're pushing hard. The team will work hard tonight to fix the car, and starting the race from P12, we're hopeful that he'll be able to fight for some points.

"Jenson's pace has been encouraging all weekend, and he kept his motivation high during qualifying despite having a 15-grid place penalty for power unit element changes. It must have been hard for him to qualify in such a condition especially here in Monaco, but he showed his professionalism today.

"Although there's not much time until the race, we still have a lot to do this evening. We'll continue our efforts analysing the data collected in order to improve further for tomorrow."