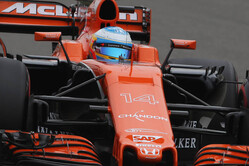 The McLaren-Honda team was unable to capitalise on the upgrades brought to the first European race of the season at the Circuit de Barcelona-Catalunya.

Stoffel made a good start from the final slot on the grid, moving up to 15th by the end of the first lap. Despite a fierce battle and a strong passing manoeuvre on Jolyon Palmer, Stoffel - like Fernando - struggled to maintain his place within the pack during the first round of pit-stops, and settled into 16th place until lap 32. At Turn One, Felipe Massa was unsighted as he closed in along the pit straight, and he and Stoffel made contact, the resultant suspension damage to Stoffel's car forcing him to retire from the race. Stoffel will take a three-place grid penalty in Monaco for the incident.

Despite his strongest grid slot of the year, Fernando lost his seventh position on the opening lap, after being pushed wide by Massa into Turn Two and taking a trip across the gravel. He lost ground and dropped down the order, ending the first lap in 11th place. The Circuit de Barcelona-Catalunya being a relatively high speed track, the MCL32 wasn't able to progress through the field, and Fernando lost positions through the first and second round of pit-stops, after which he spent much of the afternoon in 15th place. A spirited drive and an unplanned final pit stop on lap 51 allowed him to find better pace in the closing stages, and he moved back up to finish his home race in 12th position.

Fernando will tonight fly to Indianapolis for the first practice session tomorrow morning ahead of his Indy 500 debut. Meanwhile, Jenson Button will visit the McLaren Technology Centre this week to drive the simulator again, before deputising for Fernando in the Monaco Grand Prix in two weeks' time.

Fernando Alonso: "The race didn't go as we'd planned. We were a little bit unlucky with the contact in Turn Two with Felipe [Massa] and then we were behind Daniil [Kvyat] for too many laps in the mid part of the race, but even without that I think we didn't have the race pace to be in the points today to be honest.

"I'm a little disappointed, but at least we finished the race, and hopefully this is the first sign of a step forward in reliability. We now need to prepare better the next Grand Prix.

"Tomorrow at 9.00am I need to be at the Brickyard, and at 12.00pm noon I'll be in the car for first practice. So I now have 14 hours to rest, nine of which will be spent on the plane, so we need to switch into Indy mode now, and for the next two weeks my full focus will be on that."

Stoffel Vandoorne: "I haven't seen the [Massa] incident properly on TV yet. I wasn't really expecting Felipe [Massa] to be there - I think I left enough space for him to be able to pass - but unfortunately we made contact and my front wheel broke, so that was the end of the race for me.

"I don't want to blame anyone, and in my personal opinion it was just a racing incident.

"The manoeuvre on Jolyon [Palmer] was my first overtake this season, so at least I got something out of the race. The fact that that move felt so good shows that our package still isn't strong enough, and we're still not in a position to fight with the others. But we've taken a step forward for this race with the upgrades we brought here, and some areas are definitely improving, but in the race we're still struggling a bit. Hopefully we can carry some more improvements into the next race.

"I don't want to make any predictions for Monaco, but the chassis has been improving, and hopefully we'll bring a couple more updates that will pay off. We'll have to wait and see, and try our best; that's all we can do at the moment."

"Through no fault of his own, Fernando got involved in Felipe's [Massa] lap-one ‘off', and immediately dropped half a dozen places as a result. He pushed as hard as he could thereafter, but the gap proved unbridgeable and he ended up driving a lonely race to 12th place.

"After being awarded a 10-place grid penalty as a result of the team's decision to replace some elements of his car's power unit this morning, Stoffel was forced to start the race from 20th and last place. From there he drove the first third of the race very hard and very well, working his way up to P16 by lap 20, the highlight being a strong passing manoeuvre on Jolyon's [Palmer] Renault.

"Unfortunately, his good progress came to a halt on lap 33, when contact with Felipe's Williams damaged his suspension and rendered his car undriveable.

"So, results-wise, today is a day for us to forget, but there are positives to be taken from the weekend nonetheless, not least our solid qualifying pace. It's clear that the MCL32 is a chassis that our drivers can really lean on - and that quality augurs well for Monaco, on whose sinuous streets we'll do battle with our rivals once again in two weeks' time."

Yusuke Hasegawa: "After yesterday's good qualifying with a great performance by Fernando at his home grand prix, today's result turned out to be disappointing for all of us in the team.

"Fernando was running well despite having an unfortunate incident on the first lap and finding himself back down the grid. He never gave up and showed encouraging pace while chasing the cars in front. I'm disappointed as I think today his pace was good and we were competitive enough to get some points.

"It was a tough race for Stoffel. He had to start from the last row and then retired in the middle of the race. I think he's having a challenging time at the moment but we'll overcome the situation together with him.

"Next up is Monaco, and it will be a big opportunity for us. It's a very technical circuit and a real drivers' track, so here's hoping Stoffel and Jenson will run well there."