IndyCar boss has no intention of poaching F1 stars 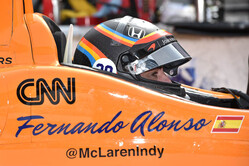 It's fair to say that after Nico Rosberg's retirement in December, the subsequent recruitment of Valtteri Bottas and the two victories for Sebastian Vettel and Ferrari, Fernando Alonso's participation in the forthcoming Indy 500 is the biggest story to hit motor sport in some time.

Indeed, over two million fans from around the world logged on to watch his IndyCar debut on Wednesday.

However, as the Spaniard seeks to take another step towards motor sport's Triple Crown, IndyCar boss, Mark Miles, insists he will not attempt to take advantage of the boost Alonso's recruitment has given the sport and will not attempt to woo other F1 drivers across the pond.

"I don't think it's a strategy for us," he said, according to Reuters. I think it was a unique set of circumstances in so many respects so we're not going to be following the grand prix series around and trying to poach drivers.

"I think more drivers will pay more attention to it and we'll see what happens," he added. "There may be points in their careers where we make some sense. It's not a strategy per se."

The sixth F1 driver to head to Indianapolis having won the world championship, Alonso will face opposition from a number of former colleagues later this month, including Juan Pablo Montoya who won the Indy 500 in 2000, the Colombian heading to F1 the following season.

However, while many have responded positively to the move, opinion in the F1 paddock is divided, with Red Bull boss Christian Horner claiming McLaren must be "barking mad" to risk its star driver.

Fact is however, the whole adventure is basically a smoke and mirrors exercise by the Woking team and Honda to detract from its ongoing F1 nightmare.

"It's really about the attention," said Miles, "and it's clear just from looking at the audience for the test this week and streaming that it's quite exciting around the world."