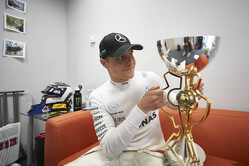 Hot on the heels of Valtteri Bottas' first Grand Prix win, the Pitpass crew assembles to digest the latest round of the 2017 Formula 1 World Championship.

Chris Balfe, Mat Coch and Max Noble all squeeze in to the Pitpass recording studio to reflect on the Russian Grand Prix, a race the trio - none of whom appeared to have watched the same event as Eddie Jordan - agree was far from a classic. Indeed, about as far from a classic as they came, in other words, a classic non-classic race from start to finish.

Still, there were glimmers of hope, enough to keep the team enthralled if not particularly entertained, and optimistic ahead of the start of the European leg of the season.

Bottas' performance was of course a stand out, but there are others who rate a mention. Jolyon Palmer, for instance, is mentioned at least once, as is three-time world champion Nelson Piquet.

The truth is, the Russian Grand Prix wasn't a grandstand event, but it injected interest back into the sport at a time when it needed it most. As pressure from some corners mounts on Mercedes to back Lewis Hamilton's tilt at another world championship, Bottas has thrown his hat in the ring and shown he's not about to roll over for his more illustrious team-mate.

There's also the prospect of a Ferrari versus Mercedes tussle to enjoy, with the German team seemingly on the ropes for the first time in years. Can Ferrari really deliver for Sebastian Vettel or, or, to put the question a different way, did Fernando Alonso leave too soon?

Naturally there's talk about Fernando, though it's an old topic that seems to do nothing but go around in circles. Ironic, really. Then there's McLaren and the fate that awaits it. Still, at least it can console itself knowing it won’t be struggling alone next season now that Honda is supplying Sauber.

Red Bull gets a bit of a mangling, while there is high praise for Force India.

A self-confessed pie-man, Balfe isn’t quite prepared to join Coch is devouring a portion of the humble variety just yet, Mat feeling that Valtteri has finally proven himself.

And while most are under the impression that there was only one overtake in Sochi – that of Pascal Wehrlein on his Sauber teammate, Noble points to the superb manoeuvre that saw Bernie nip in front of Chase Carey to take pride of place alongside Vladimir Putin… just a week after referring to himself as a "hitman without bullets".