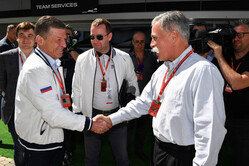 While Eddie Jordan may have felt the Russian Grand Prix was "unbelievable", "amazing" and "exciting", for the majority of races fans it was, other than Sebastian Vettel's fruitless pursuit of Valtteri Bottas, soporific.

Indeed, the only other way the race could have been less of a cure for insomnia is if it had been held at night, something which Bernie Ecclestone had been calling for for some time.

Indeed, the event's chief executive, Sergey Vorobyev, had previously claimed that the event would become a night race by 2020, however this was dependent on the government providing the funding.

Speaking at the weekend however, Dmitry Kozak, Vice Prime Minister of the Russian Federation, ruled out any hope of the Sochi event joining the likes of Abu Dhabi, Singapore and Bahrain in becoming an evening event.

"We have been watching TV feed from Sochi as it is now and it is fabulous," he said, "we can see the beautiful Olympic venues, great landscapes and there are no reasons to move it to evening hours."

Kozak, who visited the circuit on Saturday and met with FOM boss Chase Carey, said of the meeting: "We talked about the continuation of our cooperation with the new Formula One Group management.

"We have reached agreement in all areas," he continued, "we have had a wonderful cooperation experience and nothing is going to change.

"Formula One racing gives additional life to all Olympic and tourist infrastructure which was set in place in preparation for the Olympic Games. This is an additional opportunity to use the Olympic legacy. Thus, the use of budget investments in the development of Sochi's overall infrastructure is being made more efficient."

"The 150,000 visitors, who will be attending this spectacular event for the next 4 days, will certainly help maintain Sochi as a tourist attraction," added Veniamin Kondratyev, Governor of Krasnodar region. "Those who come here on vacation as well as tourists help both maintain and further develop Sochi and the Olympic infrastructure."