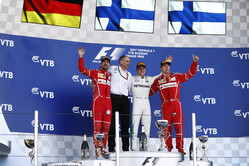 Valtteri, tell us, what does it feel like, your first ever win in grand prix racing?
Valtteri Bottas: Amazing. It took quite a while, more than 80 races for me, but definitely worth the wait, worth the learning curve. This strange opportunity came to me in the winter to join this team and they made it possible today, so I really want to thank to the team, without them it wouldn't be possible, so feels amazing.

It's like a fairy tale isn't it? Four or five months ago you were going to drive with Williams, a particularly good team, but you got the chance to come to this team - a winning, world champion team - and you're one the top [of the] podium at the moment.
VB: yeah, we've had a tricky beginning of the year, you know the fight with Ferrari was again very close. We managed to be on top, but we need to keep pushing, we need to keep finishing with both cars all the time one and two, that's the plan. But just very, very happy now.

Just going to interject here for a second because we see Toto down there and he of little faith gave you a one-year contract. I've got a pen Toto, we need a three-year extension on that minimum with proper money, is that OK? Coming back to you... where's he gone. [Sebastian], Felipe Massa, tell me about him, what happened on that last lap?
Sebastian Vettel: I obviously tried everything to catch Valtteri and maybe I thought there might be some opportunity on the back straight. I was sure [Felipe] would lift around Turn 3, it's flat out, and let me be, so I wouldn't lose much time, but then I think I just wasn't sure what he was going to do and I ended up losing a bit more than I was hoping for. But it doesn't matter. This is the man of the race today, big congrats to Valtteri, it's his first grand prix win, so it's his day.

Very well said. I have to ask you, your strategy: you ran much deeper into the race on those tyres and it looked like it was paying off.
SV: Not really, we didn't come out ahead. Yeah, we had fresher tyres in the end. Obviously there was a gap to Kimi behind and we just decided to try and extend as much as possible to hope for maybe Valtteri running into trouble with traffic, us having a clear track. That was the plan. So I think we tried everything, but obviously we lost the race at the start, which was a bit of a shame. I had a good start but...

I was going to ask about that. You were a bit unlucky, both of you, on the front row of the grid but you have the longest run to the first corner but you got out-dragged?
SV: Yeah, that's basically it. I think our start was basically a match with Valtteri, maybe he gained a bit of momentum in the beginning but then obviously he had a massive tow. I defended the inside but by the time we approached braking he was already in front and able to shut the door on me, so well done, and that's where he won the race. And then he did a superb first stint, I couldn't stay with him, he was very, very quick all; race, no mistakes and as I said - man of the race.

Ladies and gentlemen, year on year Kimi has been voted the most popular driver in Formula One and you have your fans here.
Kimi Raikkonen: Yeah, I'm very happy that I have here support but whatever country they come from I'm very happy to have the. Unfortunately today we could only give third place but we try next time more so.

We have to talk about the podium and the lock-out on the front row. We weren't sure how it would wind up and today both of you are on the podium. It shows a great sign for the future of this season and the championship and the excitement of it?
KR: Yeah, I think I have had a little bit of a rough start to the season. Far from ideal but this weekend for sure has been a step forward. We have been more happy with how things have been running but we still only finished third. We lost out at the start and then not a lot happened after that. We keep trying and keep improving and I'm sure we'll get there, but it's all about... all the small details have to be exactly there and then you will get the first place. The four or five of us are very close most of the time, so it's the small differences that make a big difference in the end.

Valtteri, special day for you as we have already said. You also got driver of the day; that's another little celebration you didn't know about. Got to talk to you about that start: [Sebastian] said you more or less but you couldn't have, you absolutely out-dragged both of them.
VB: Yeah, I mean, I think here normally starting from the second row is not too bad. I had a good start, if anything maybe slightly better than the guys in front. Obviously slipstreaming managed to get the inside for Turn 1. That was OK, but I'm a little bit more happy about the safety car restart actually.

He has big shoulders, he has a lot to live up to because he's got Kimi, Keke Rosberg and of course Mika [Häkkinen], all world champion Finns. Are you going to be the next world champion Finn?
VB: For me that's the only goal in my career, so we will keep pushing for that.

Valtteri, has the reality of what you've just achieved sunk in?
VB: No. It's going to take a while. I have to say, normally I'm not that emotional but hearing the Finnish national anthem is something quite special for me - felt good. But it is a little bit surreal: first win, and hopefully first of many. It was definitely one of my best races, personally, ever. It's a good feeling and just, yeah, happy.

How was the pressure towards the end of the race when you had Sebastian gaining on you and you were hitting traffic?
VB: It was OK. Just the main thing was with the lapped cars and trying to get past those and with these new cars we definitely lose more downforce, already two seconds, three seconds behind, so it was tricky to get close and pass them without losing time. That was the main thing at the end and I wasn't quite happy for a few occasions. I also had one lock-up, maybe 10 or 15 laps to go, which hurt a little bit the pace. Other than that it was OK. I did ask for a bit more radio silence from the guys on the pit wall, just for me to get on it and focus for it and feel a bit more like home. Quite nice and quiet and that helped.

How much confidence do you think this victory will give you going forward?
VB: I think a lot. I've always know I could do good results if everything goes right. I always trust in my ability but it's nice to get confirmation that the results are possible, that anything is possible, so definitely good to continue from here.

Sebastian, in reality it all came down to the start, didn't it? How was your getaway from pole position?
SV: I thought it was OK. [To VB] Was it bad, my getaway?

SV: Well, later on, yes. No, I thought there was a bit in the very beginning where I could have been a bit more aggressive but it was a bit hard to tell because for the formation lap, for some reason... I have the time of day in the car and it was two o'clock and the lights didn't go off. So I was ready to go. I don't know why there was a delay. Maybe whoever's responsible to turn the lights off, didn't turn the lights off! What I mean by that is that I didn't get a proper read of how the grip was at the grid, so I think I ended up maybe a bit too conservative. Still, I had a good start. I had a look in the mirror, mine was I think better than Kimi's. I saw Valtteri coming and I thought 'OK, it will be close' but it felt like I had a tent dragged behind me and he was gaining a lot. He was able even before we hit the braking to come back and shut the door. So I did well but nothing I could have done, I had the outside line but nowhere to do so in reality that's part of where we lost the race. And then the first stint: we were just not quick enough to stay with him. In the end of the day we can talk about my race but today is Valtteri's day. He drove a fantastic race, he had incredible pace. Also, if you look all weekend where he's been compared to his team-mate, so, y'know, he's done a superb job, it's his day and he deserves to win today because he drove better than all the rest of us. So... it's not easy to swallow. I would have loved, obviously, to come back but that's the way it was today. Well done.

Kimi, coming to you, similar problems to Sebastian at the start? Just talk us through your getaway.
KR: I had a pretty poor start, comparing even to Seb. Got wheelspin straight away and then I really thought I was going to lose a lot more but then luckily, both of these cars went side-by-side and I started to get the tow and I managed to stay ahead of Lewis in the end. But, I don't know what happened. It was slippery and lost a lot, so, not ideal. If you look last year it's all about starts, and if you lose a place in those, it's going to be a boring race. Not a lot happened after that. Mercedes, Valtteri was a bit too fast but then we were kind of holding our positions but nothing really happened the whole race, so, yeah, all about the start. Happy for Valtteri. People always think that we have something against each other because we have come close to each other and into each other a few times but no, I'm very happy for him to win. It doesn't mean that I'm not happy if Seb wins. It's good for him and things will turn out to be for sure good for him. It's going to be close between both of the Ferrari and both of the Mercedes drivers this year, so it will be exciting - but unfortunately a lot of times it will depend of what happens in a first lap. That's how it's going to play out. Hopefully it goes better. I'm more happy this weekend but obviously not happy to be third but this is how it goes sometimes.