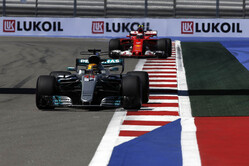 It's the news the British media has been waiting for, Mercedes is ready to invoke team orders.

However, rather than ordering Valtteri Bottas to defer to Lewis Hamilton in order that the Briton can mount his bid for a fourth title, the German team is preparing to let whoever appears best set to challenge Ferrari today to have preference.

"It's logical," Mercedes non-executive chairman Niki Lauda told BBC Sport. "If I cannot go as quick as my team-mate I have to give him room to fight Vettel.

"The biggest problem for Bottas and Lewis is Vettel," he continued. "In the past we had no team orders because we were dominating with both cars and there was no enemy, no-one could get in between. This year, the first three races, is completely different.

"Ferrari is competitive," he said. "Vettel is right there, makes no mistakes and gives us a real interesting fight. So our new policy has to be that if one driver of ours cannot go quicker than the other one then he has to think as a team and use his problems not to block the other one. But it is not a team order."

Bottas qualified ahead of his Silver Arrows teammate for today's Grand Prix, the Finn just 0.095s off Vettel's pace while Hamilton, following a mistake on his final flying lap, is 0.573s adrift.

With the increasing threat to Mercedes - and thereby Hamilton - from Vettel and Ferrari, the British media has been calling on the German team to switch from its usual policy and install the Briton as the defined number one.

In Bahrain, where a "stupid mistake" by Bottas behind the Safety Car cost him dearly, the team finally ordered the Finn to yield to his teammate as his pace was allowing Vettel to increase his lead over the three-time world champion.

Speaking after the race Bottas admitted that being told to move aside is the worst thing a driver wants to hear.

With Ferrari locking-out the front row for the first time since France 2008, and coming off the back of two wins in the opening three races, it is clear that Mercedes three-year dominance of the sport is under threat if not at an end.

Consequently, Mercedes has to do whatever it can to achieve the best result though Lauda insists the team is not favouring any particular driver rather the driver who is best placed to take on the Scuderia.

"So far Lewis was quicker, particularly in the last race, but these things can change, it works in both directions, we have to wait and see," he said.