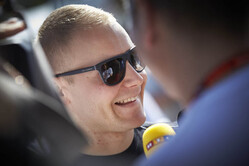 Hamilton and Bottas both adamant that there are no need for team orders.

Though the 2017 season is just three races old, with Ferrari and Sebastian Vettel clearly at a stage where they appear able to mount a sustained challenge to Mercedes, some believe it is time for Mercedes (and Ferrari) to throw its efforts fully behind one driver.

When we say 'some', we really mean the media, and in particular the British tabloid media, which remains determined to see any effort by Johnny Foreigner to challenge its beloved Lewis Hamilton as a matter for national concern.

However, when confronted by the assembled Fleet Street hacks in Sochi today, neither Lewis nor Valtteri was willing to play ball.

Asked if he thought it was time for such a move, Hamilton told reporters: "I do not want them, and never have, team orders have always been a very odd thing, and a difficult thing to judge, and something I've never particularly liked.

"But it is in our rules, and our approach is that the team needs to win the race," admitted. "We have to try and work as a team, but only in special circumstances.

"It's difficult every single time and it's definitely not a great thing to hear. I think you just have to assess in the moment, what your position is and whether you're in a powerful position and when you're actually contributing to the team's result or you're not. Then make the call."

Pushed at the official press conference by the Daily Mail on the same issue, Bottas replied: "We have not had the conversation because I don't think there is any need to.

"This team had never had number one or number two drivers and is not planning to," he continued. "It is always trying to give an equal chance to both drivers, but the last three years the gap to the second quickest team has been bigger, so now every single detail can cost points.

As the Mail continued to pressurise the Finn, reminding him that Mercedes pays his wages and therefore calls the shots, he added: "I don't think that will happen. If I have some issues in this race for whatever reason, a different strategy or Lewis is stuck behind me, then I will move over.

"We are doing this for the team and the target is to get maximum points for the team," he added. "I have always been a team player, but what is going to happen in the future between me and Lewis with team orders, we are not planning anything. This year the team needs to be careful and more clever, so I will collect every single point possible in the race."