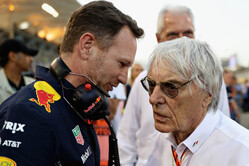 Not for the first time, Bernie Ecclestone has publicly derided his new official job title, that of chairman emeritus.

The Briton, who at the time of F1's sale to Liberty Media in January, said he was being sidelined, made similar comments last week in Bahrain, his first visit to the F1 paddock since the sport changed hands.

It was an intriguing visit, the Briton holding court not only with the media but with old friends and foes, clearly enjoying the warm glow of the limelight and using it to drop soundbites that had more meanings than an old-fashioned end of the pier comedian.

Revealing that he is now virtually out of the loop as far as FOM is concerned, the former F1 supremo used to occasion to the maximum.

Days later and Ecclestone has once again dismissed his new role, this time using the medium of Eddie Jordan and Top Gear.

Asked by Jordan what his new role involves, Ecclestone replies: "I don't know really, it's a little bit like giving a hitman a gun and no bullets..." Subsequently adding: "But I've got enough money to buy the bullets."

Of course, Ecclestone is well aware that hitmen are not limited to guns, and was keen to clarify a previous comment he had made.

Asked if the comment was a 'message' for Liberty, he smiled and said: "It depends how the people want to take meanings doesn't it?"

Turning his attention to the sport itself, having been accused by new boss Chase Carey of allowing it to stagnate, Ecclestone said: "The problem over the last two or three years has simply been no competition and now it looks like we have got some.

"I think we ought to get rid of a lot of the silly regulations that restrict so many things for the drivers and the people building cars," he added. "It's become an engineers' championship not a drivers' championship. It's the drivers that should be driving the cars, they're the ones who should win the races and get all the credit for doing what they have done."

Asked if Ferrari will win the title, he said: "Honestly I shouldn't say this, but I hope they do... but I don't think they will."