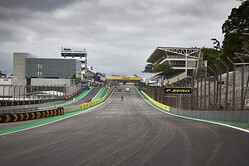 As the city of Sao Paulo prepares to put the Interlagos circuit up for sale, Bernie Ecclestone emerges as a potential buyer.

The circuit, which has hosted the Brazilian Grand Prix 34 times since joining the F1 calendar in 1973, is part of a wide ranging package of properties the City of Sao Paulo is looking to offload amidst the country's ever worsening recession.

Although a staple of the F1 calendar, a favourite of fans and drivers alike, the failure to update the track and its facilities has placed a question mark over the circuit and its ability to continue hosting Brazil's round of the world championship.

Plans to upgrade the track, including a new, relocated, pit and paddock complex, have been mooted since 2012 but as yet only a few improvements have been carried out.

If sold, the new owner would have the right not only to upgrade the circuit but also to build a hotel, indeed there is talk of luxury apartments and even a museum dedicated to Ayrton Senna.

"The privatisation of the track is the guarantee of the continuity of Formula One," Sao Paulo Mayor, Joao Doria, told Reuters.

Asked if Bernie Ecclestone, who is increasingly spending more time in Brazil, including the weekend of the recent season opener, might be a potential buyer, Doria admitted that he has discussed the idea with the British billionaire who is married to Brazilian lawyer Fabiana Flosi.

"He showed interest," he admitted. "He's going to participate in the auction for the track. I have the impression that international funds are going to take part as well. I have no doubt that we will sell the Interlagos track, and sell it well."

The Briton, who, it was revealed earlier today, vetoed plans for a Grand Prix in Vietnam, feeling that the sport is already overrepresented in southeast Asia and needs more 'traditional' venues, suggested that F1's new owners, Liberty Media, might also consider a bid for the track.

"I think they are probably going to think about it," he said.

Indeed, only last week, COTA boss Bobby Epstein said it would make sense for Liberty to actually own some of the circuits on which its series races.