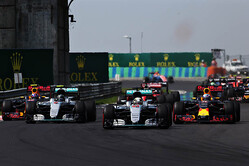 It seems like only yesterday that the countdown on the front page of the site read 100 days until Melbourne.

As we looked ahead to Christmas and New Year, thoughts turned to the new regulations for 2017, the launches, testing and then Melbourne.

Now, we are just days away from the opening practice session.

And while the calendars on the wall in Liberty Media's F1 HQ might currently read March 2017, thoughts are already on 2020, the sport's new owners aware just how quickly time passes.

It is in 2020 that the current Concorde Agreement comes to an end, at which time, all bets are off and the sport, under its new owners, really gets underway.

Aside from the desire for Super Bowl weekends surrounding each race, more events, more sponsors and more income, Liberty is seeking a means of levelling the playing field.

While it might find an acceptable means of dividing the prize pot in terms of results, the sport's new owners face a monumental task when it comes to the special bonuses handed out to the likes of Ferrari, Mercedes, Red Bull and Williams under Bernie Ecclestone's watch.

Aware of Liberty's plans to end the £80m annual historic bonus, Ferrari's Sergio Marchionne, aware that the move is a couple of years away, has merely said that he wants clarity on the sport's new owners plans, but one can rest assured that as we get closer to the date and those plans are made public the Italian team will become more vocal, more animated.

That goes likewise for Mercedes, Red Bull and Williams, with some already feeling that 2020 could mark a watershed moment in the history of the sport as we know it.

Indeed, the bonuses were paid by Ecclestone as a means of preventing the sport falling apart last time around, and it is highly unlikely that the teams will accept the end of their deals without a fight.

"The elephant in the room, we all know, is distribution of funds," he told Motorsport.com, "and the discussions need to start on that so that everyone knows where everyone stands and we can start to find solutions. We don't want to have a Mexican standoff in 2020 to see who's 'chicken', that's what happened last time."

Indeed, last time around, Brawn was on the other side of the negotiating table, a poacher, yet now as Managing Director of Motorsport, as gamekeeper he has to try and keep the teams in line.

"There was a time in American football where there was quite a heavily distorted reward system and the top two teams got the majority of the money and the rest struggled," he said. "The top two teams sacrificed their position in order to have an equitable solution. When it became much more successful because there was a competitive spread, those two teams surpassed what they were getting before because the sport became so much more successful.

"Is there a lesson for us there?" he concluded. "It's a great example of the balance of sport and commercialism. The new owners and my fellow directors come from that culture. It's not about razzmatazz and all the rest of it, it's about lifting the whole business. Can we do that? It's going to be a big challenge, but we can try."

All we can say Ross is... good luck with that.