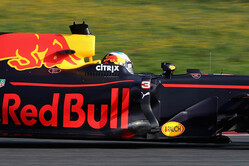 All in the best interests of the sport, Christian Horner claims the continued Mercedes domination of F1 would be "unpalatable" and believes the sport's new owners should act.

As editor Balfe suggests in the latest Pitpass podcast, while team bosses (and presidents) claim that the sport must be more competitive and put on more of a show - for the fans, don't you know - fact is, Christian Horner, like Maurizio Arrivabene, Claire Williams, Bob Fernley, Gene Haas, Franz Tost and all the rest would like nothing more than to enjoy Mercedes-like domination for a year or two. Regularly filling the front row of the grid and then going on to finish 1-2 in every race a lap ahead of the opposition.

So while the likes of Horner bemoan Mercedes domination of F1 in recent years, they are deeply envious of it.

Nonetheless, the Briton is extremely concerned, not only for the fans but also the sport's new owners, fearing that continued domination by the Silver Arrows will compromise its investment.

"It's unpalatable to think of it for another three years," he tells The Guardian. "The new owners of F1 know very much about putting on a great show and there being good and healthy competition.

"That can't be artificially done obviously," he continues, "but I would be surprised if they were prepared to allow total dominance like the last three years."

While pre-season testing suggests Ferrari might pose a threat to the German team, many believe Mercedes remains the benchmark and few would bet against the Silver Arrows taking a fourth successive title.

Quite how the Stuttgart steamroller might be derailed, Horner doesn't but admits that doing it artificially, for example with penalties or a handicap, "would be bad for the sport".

"How you prevent it from happening I don't know," he admits. "It would be wrong to artificially slow someone down. We have just got to work hard to put them under pressure."

Maybe ordering Mercedes to use Renault - sorry, Tag Heuer - engines and allowing Red Bull use of the German team's power units would be a start.