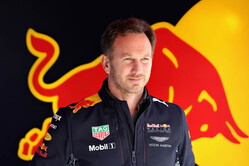 Though Red Bull leapfrogged Ferrari in the 2016 standings, leaving many to believe that the Austrian team, courtesy of a new improved engine from Tag Heuer (Renault), will take the title fight to Mercedes this year, Christian Horner isn't so sure.

"Mercedes is the clear, clear favourite," he told the official F1 website. "They have won 50 races in the last three years, we've won five and Ferrari three. Do I have to say more?"

Asked if he believes the new regulations could see Mercedes struggle, the Briton is under no illusions.

"The regulation changes aren't that big. There have been times with equally big changes: refuelling/no refuelling; blown diffusers and no blown diffusers; a change from Bridgestone to Pirelli. One thing is crystal clear: good teams adapt."

But Red Bull made clear progress in 2016, surely this will carry forward?

"Again, Mercedes are total favourites," he insists. "Yes, we've made a good car, a good basis of a car that we will hopefully be able to develop effectively through the year. Renault has had a busy winter as well and hopefully the TAG Heuer-branded engine in our car will perform well this season. How well, and what the others will find, is pure speculation."

Throughout testing we are told that the true pecking order will not become clear until qualifying in Melbourne, but on an individual basis a team must come away from Barcelona whether it has got it right or not.

"Yes, of course, we do analysis," he replies, "but what you don't know in modern Formula One, with energy levels and of course fuel loads, is what specifications others are running with on their cars. That makes it so tricky to gauge. We are content with our pre-season, we are pleased with the way the car is reacting, the drivers feel confident - they like the feel of the car. So we are ready.

"Adrian definitely has his mojo back again," he adds. "Right now he is juggling two projects - the Aston Martin car and the RB13 - but he's got a great team and together they are doing a super job. Adrian is contributing effectively into that. It's great to see him enthused again about Formula One."

Needless to say, Horner, like several other team bosses believes his is the best driver pairing.

"I honestly believe we have the strongest pairing," he says. "Ricciardo drove a wonderful year last year and is really hitting peak form and, with the exciting talent that is Max Verstappen, who is getting stronger and stronger, the dynamics in the team are fantastic.

Asked to go out on a limb and predict who will life the title, he admits: "It is obviously a shame that the champion has decided not to defend his title - that is really an unusual scenario for a guy that is still pretty young. You could argue that it is little defeatist, but you have to respect his decision.

"But there are great champions on the grid: Sebastian Vettel, Lewis Hamilton, Kimi Raikkonen and Fernando Alonso. But hopefully it will be a new guy at the end of this season - hopefully one of ours!"