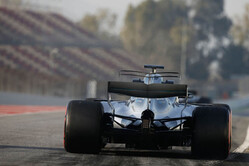 Renault boss Cyril Abiteboul insists there was no agenda to the request for clarification on oil burning.

With the possibility of the season opening Australian Grand Prix being overshadowed by an ongoing row over suspension systems, most notably those on the Mercedes and Red Bull, ahead of the pre-season tests Red Bull contacted the FIA to clarify the legality - or not - of oil burning, a practise whereby oil might be used as fuel.

The issue was first raised in 2015, and at the Canadian Grand Prix stewards investigated the Mercedes but found no evidence of wrongdoing. Indeed, it was the German manufacturer which suggested a 5kg limit on oil use.

While it was Red Bull that raised the issue with the FIA pre-Barcelona, it's engine supplier, Renault, admits that it was concerned about the possibility of Mercedes exploiting the practice but insists there was no agenda to the request for a clarification.

"Clarification of regulations is always very important," Cyril Abiteboul told Autosport, "whether it is suspension or whether it is fuel systems, but also oil.

"We are right now in the period of the year where you have lots of traffic going around," he continued, referring to rumours and suspicions, "that is important.

"We were not attacking anyone in particular," he insists. "But we needed to make sure that it is clear to everyone, and it can be properly monitored and enforced that fuel should remain the primary combustible used in F1.

"We are coming into systems that are so complex, and it is very much like suspension systems," he added. "We can refer to the spirit of the regulations - the combustibles are clear for everyone that they should be fuel - but having said that any engine will burn oil. But whether you burn oil for lubrication or as a combustible is something completely different.