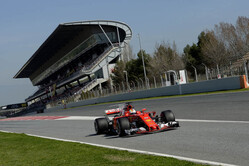 Lewis Hamilton insists the Ferrari has yet to show its true pace.... Sebastian Vettel disagrees.

Following a morning during which he eclipsed Valtteri Bottas' best time of pre-season testing, yet appeared to lift off rather than really ram the point home, Sebastian Vettel played down talk that Ferrari is heading to Melbourne as favourite.

"The car is much better than last year because the nature of the formula has changed," he told reporters, "so far things are making sense, but it's still early days.

"If you look at the amount of laps Mercedes has done, if you look historically how slow they go in the testing, how much they were able to ramp it up for the races, it's clear," he continued.

"They're very fast if you look at their long-run pace," he insisted. "They're the ones to beat. For us it doesn't really matter where exactly we are now, we are growing, we need to work hard, we know that we have to improve. That's why it's important not to get distracted."

In terms of the noticeable lift-off on both of his fastest laps he said: "It's not always intentional. We're trying to run through our programme, sometimes you go a bit faster, sometimes a bit slower.

"You could see this morning what we're trying to do, we're going faster than the rest of the week and last week. It doesn't really matter here, if you look at one single lap time, you need to look at more than that, and in that regard there's still a lot of work to do."

"I think Ferrari are bluffing," he said, "and that they are a lot quicker than they are showing. They're very close to us.

"It's difficult right now to say exactly who is quicker," he admitted, "but they are very close, if not faster.

"Whatever the case, I can't wait to go out and compete. Just a couple more weeks to go."

Vettel and Hamilton were separated by 0.328s yesterday, both setting their times on the ultrasoft rubber. Bottas' previous best, which is still quicker than anything Hamilton has managed, was set on the supersoft, the Finn unable to extract more from the purple-banded tyres.

The German has completed 591 laps of testing thus far, his pre-season preparations now at an end, with half a day each remaining Hamilton is on 414 laps and Bottas 575.

In total, Mercedes has completed 989 laps and Ferrari 845.

Though Mercedes always prefers to play down its chances it will be interesting to see today if, as in years gone by, the German team finally unleashes the beast, or whether Kimi Raikkonen, who had a difficult time on Wednesday crashing out of the session, will further confuse the issue.

We are also waiting on Red Bull to show its true pace.