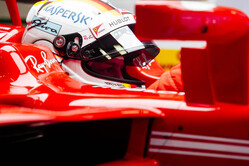 Other that Kimi Raikkonen's off late on Wednesday, it has been an impressive test for Ferrari at Barcelona.

Despite not really going for it on the supersofts, far less the ultrasofts, Sebastian Vettel and the Finn were fourth and fifth fastest overall, sticking with the softs while pace-setters Bottas, Massa and Ricciardo had either achieved their best times on the red-banded tyre or purple.

Then came Thursday morning and the German finally took the gloves. First taking a huge bite out of Bottas' best with the softs he then improved with the supersofts and finally the ultras.

However, despite getting the benchmark down to 1:19.024 it was clear that there is still much to come from the SF70H, for on both his hot laps Vettel was visually and audibly seen to back off, thus clearly suggesting that there is more to come.

Talking to reporters during the lunchbreak, following what had been a scintillating display by Ferrari, Vettel was keen to play down talk of the Maranello outfit heading to Melbourne as favourites.

"The car is much better than last year because the nature of the formula has changed," he said, "so far things are making sense, but it's still early days.

"If you look at the amount of laps Mercedes has done, if you look historically how slow they go in the testing, how much they were able to ramp it up for the races," he continued, "it's clear.

"They're very fast if you look at their long-run pace," he insisted. "They're the ones to beat. For us it doesn't really matter where exactly we are now, we are growing, we need to work hard, we know that we have to improve. That's why it's important not to get distracted.

"I had a little off this morning," he confirmed," and that cost us a bit of time.

"We'd like to have done more laps by now," he admitted. "We can have a good afternoon hopefully, finish out the remainder of the test and also have a good day tomorrow.

"In terms of the job list, we're still very busy," he added. "There's a lot of stuff on our list, we're probably still a little bit behind, a lot of boxes to be ticked."

Asked about the easing off on his hot laps, he said: "It's not always intentional. We're trying to run through our programme, sometimes you go a bit faster, sometimes a bit slower.

"You could see this morning what we're trying to do, we're going faster than the rest of the week and last week. It's pretty clear.

"It doesn't really matter here, if you look at one single lap time," he concluded, " you need to look at more than that, and in that regard there's still a lot of work to do."