Renault: Manufacturers the backbone of F1 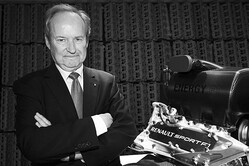 While F1's new management team remains holed up in its temporary London HQ, it's interesting to note that just week's into the sport's new ownership certain parties in Planet Paddock are already busy preening themselves in an attempt to get the new relationship off to the best possible start.

As the Liberty team makes clear its intention to level the playing field, a move that will mean the end of bonus payments and the like, the teams react in their own unique way.

While some bristle and prepare for the fight ahead, others adopt a more conciliatory tone, insisting that like the new management they only want what's best for the sport.

Back in the F1 fold as a manufacturer for just one year, Renault, while insisting that it hopes to work with the new owners in shaping the sport for the future, believes that it is they, and fellow manufacturers, who should be regarded as the backbone of the sport courtesy of their investment in the sport.

"We've had some discussions, Stoll told Motorsport.com. "We explained that we should work together in order to increase the show, because the attractiveness of the show has decreased a little bit.

"We have to open a new era with Liberty," he continued, "and they are really willing to do something different. I don't know what that's going to be, but we want to be considered as the main players for the show. Without the car makers like Mercedes, Ferrari, Honda and ourselves - because we are the only ones who are developing engines and investing money – there's not going to be a show. So we have to establish a dialogue together and see how we can meet our target."

While in no way underplaying the manufacturers' importance, let's not forget that Renault walked away from the sport at the end of 2011 in the wake of the Crash-gate scandal.

Indeed, in the couple of years before that, BMW, Honda and Toyota had also upped sticks and walked away.

Fact is, throughout, the constant has been the likes of McLaren, Williams and Ferrari, who have been there through thick and thin.

Manufacturers will always come and go, it is the nature of their business. Furthermore, while they do invest in terms of engine development and the like, they already exert more than enough influence… indeed it was they who insisted the current formula be adopted… Renault leading the fight even if Mercedes produced the better product.

Looking ahead to 2020, when the current Concorde Agreement runs out and a whole new compromise must be found, Stoll admits that there are difficult times ahead… especially when it comes to improving the financial rewards.

"Liberty is expected to discuss what will be in the future, because by 2020 everybody knows the current deals will stop," he said. "There are a lot of things to change with this redistribution of rights, and the fact that small teams cannot survive.

There are many things to be discussed," he admits, "and this is something that can come in the coming weeks.