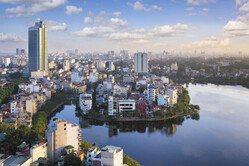 Bernie Ecclestone has revealed that he put the brakes on a Grand Prix in Vietnam which was ready to rev up last summer according to an article in the Independent by Christian Sylt.

Ecclestone has had a lot of stick over the years for his strategy of taking F1 to emerging nations which use the sport to promote themselves on the global stage and drive tourism. It has boosted both F1's international exposure and its coffers. This is because emerging markets are prepared to pay top Dollar whereas traditional nations don't need to rely on sport as much to attract tourists.

The strategy has driven F1's average annual race hosting fee to around $31.5m but it has taken the sport to places which had little racing history like Russia and the oil-rich nation of Azerbaijan.

It was widely assumed that Ecclestone's only driving force was making more money and long-standing jokes suggested that he would agree to races in countries like North Korea and Iraq if they paid enough. Today's article in the Independent suggests otherwise.

Reflecting on his 40 years at the wheel of F1 Ecclestone told the Independent that last summer he declined the chance to meet the president of Vietnam and sign a race in the country which is still most famous for its two-decade war with the Americans. Ecclestone says he put the brakes on the plan as Vietnam has little connection to motorsport and F1 already has several races in the region.

"Last year I was approached about having a race in Vietnam. I was offered the opportunity to meet the president about doing a deal for a Grand Prix," he told the Independent. "I could have done the deal and signed it in August. Everything was arranged for this to happen but I didn't do the deal because we already have quite a few races in that part of the world and I thought it might be a little bit over the top to have another one."

Crazy as it sounds, a few figures in F1 voiced support of a race in Vietnam. Former independent director Martin Sorrell suggested it as a future race location last year. After the Italian Grand Prix Gianluca Di Tondo, senior global brand director of F1 sponsor Heineken said that if he could add one race to the calendar it would be "in Asia: Vietnam. We are very present in Vietnam through a local partner and they were our guests in Monza and they were over the moon. So why not have a race in Ho Chi Minh City."

A track was due to be built near there in 2010 but hit the buffers and one reason for this was Vietnam's strict rules which prevented locals from betting on sports events, despite being famous for their love of gambling. Last month this law was relaxed for anyone with a monthly income of more than £360 and Vietnam's first race track opened last year to take advantage of this.

Its standards are far below F1's Grade 1 Homologation but a track which would meet them was reportedly under consideration last year. It is understood that a foreign group was seeking investment to build it in Vietnam's capital Hanoi and carried out a feasibility study.

It is believed that this was the location of the proposed race and even though it would have paid an estimated £320m over the ten years of its contract Ecclestone says it would have been a step too far for F1. "It hasn't got any racing history at all," he says. "So I didn't want to put another race in the same sort of area where we already have very good promoters.

"I was criticised for putting the races in Baku and in Russia because they hadn't got that much racing history."

Ecclestone was indeed criticised for this. Most recently the ire came from Greg Maffei, the boss of F1's new owners Liberty Media. Just last month Maffei claimed that Ecclestone's driving force had been to ask "How much can I extract? How much upfront? So we end up with races in places like Baku in Azerbaijan where they paid us a big race fee but it does nothing to build the long-term brand and health of the business."

Liberty has made it clear to F1 fans and the industry that a top priority is supporting the sport's traditional and historic races as well as signing new ones in the United States which is currently home to only one Grand Prix.

At a conference last month Maffei said "it is most negative when you have some of our traditional Western European tracks which are at the heart of the fan base, like in Germany, go out.

"But there's already progress to bring them back, and if you recall we added the Ricard track in France, another place where we've been gone for some years.

"The origin of F1 is in France and England, so we're big believers in making sure places like Silverstone and the French track and the German are on the race calendars and are exciting events, which are beneficial to all the players."

With the Grands Prix in Germany and Britain both known to be at risk, one imagines that Liberty will make it a priority to secure their futures, though an additional race in the Unites States is another priority.

Maffei said last year "you think about places where it would have natural appeal I would argue Miami, Las Vegas are very interesting." It is the news that American F1 fans are expecting now that the sport is owned by a company based in their home country.

By contrast, Vietnam is not a major market for any of the teams and ranks worse than Ethiopia, Algeria and Egypt on the Transparency International Corruption Perceptions Index.