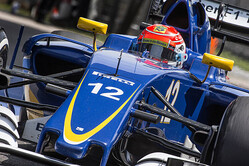 On Sunday evening, in response to Renault's tweet "First 2017 points Nico Hulkenberg reviews his Bahrain GP ahead of next week's test, he'll be driving on Tuesday", a tweet, from Nasr's account read: "Come on guys! WTF is Palmer doing there??? Please hire Felipe Nasr immediately".

Last night the Brazilian tweeted: "Hi guys, I had a non-authorized access in my twitter account. Sorry for any inconvenience. I have already changed all my passwords."

The original post followed a tough weekend for Palmer, who fought a particularly hard campaign with Nasr for the 2014 GP2 title.

While Palmer won the title it was Nasr who made it to F1 first, the youngster spending two years before being dropped in favour of Pascal Wehrlein.