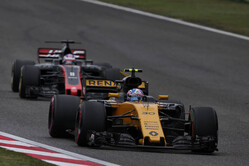 Renault Sport Formula One Team endured a frustrating Heineken Chinese Grand Prix with Nico Hulkenberg finishing 12th and Jolyon Palmer finishing 13th after an eventful 56 lap race at the Shanghai International Circuit. Nico's fine Saturday qualifying performance was undone by an early pit stop for dry tyres being followed by an incident on track requiring a Virtual Safety Car, which negated any advantage the strategy could have provided. The same Virtual Safety Car also undid the potential of an early stop for dry tyres for Jolyon Palmer. The pair crossed the finish line just two seconds apart at the chequered flag.

Nico started the race in P7 on new Intermediate tyres, changing to a set of fresh Soft tyres at the end of the first lap then a set of scrubbed Supersoft on lap 33 where he also served a 15-second combined penalty for overtaking under the Virtual and actual Safety Car.

Jolyon started the race from the pit-lane after pitting at the end of the formation lap to change from Intermediate to new Supersoft tyres. He stopped for new Soft tyres on lap 30.

Nico Hulkenberg: "We took a risk right at the end of the first lap and came in for slicks as the track was really dry everywhere apart from the main straight. As I exited the box though, Stroll crashed and the Virtual Safety Car came out, and in damp conditions if you can't push, you lose all the tyre temperature. I lost all grip; it was like driving on ice and I spun a few times... From there it just went wrong, the VSC pretty much ruined our strategy and so the race. It's a shame because I think it could have worked out very nicely for us today."

Jolyon Palmer: "It was a difficult race. We made the right call to pit at the end of the formation lap but I hit a wet patch when racing a Toro Rosso, then the tyres lost temperature under the Virtual Safety Car, so it was a very difficult first stint. On the plus side, the car ran reliably and I have a race distance under my belt now. Now we reset and head to Bahrain with the objective of a much better weekend."

Cyril Abiteboul, Managing Director: "Ultimately, this has been a frustrating weekend for us. We showed strong potential with our P7 on Saturday, however the race did not deliver the results we wanted. The early Virtual Safety Car meant we were immediately on the back foot as we'd already pitted Nico to cover the threat from those behind. He then also received a penalty. Jolyon suffered from the same Virtual Safety Car affecting his strategy and after that we were on damage limitation. We are disappointed to end the second Grand Prix with no points, however the positives are that we showed both pace and reliability here. We need to harness our potential better in the coming races."