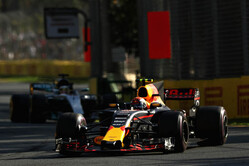 Helmut Marko reveals that Red Bull is expecting a significant upgrade from Renault in Montreal.

While 2016 saw Red Bull leapfrog Ferrari and head into the winter as favourites to take on Mercedes, pre-season testing suggested this might not be the case, with the Austrian outfit not only off the pace but suffering reliability issues.

Those fears were further realised in Australia where the team had a relatively miserable weekend, Max Verstappen finishing fifth in the race and teammate Daniel Ricciardo failing to finish after starting the race two laps down.

This followed an equally tough qualifying session which saw the Dutch teenager 1.29s off the pace and Ricciardo crash out at the start of Q3.

While the RBR13 has not benefitted from the regulation changes as many thought might be the case, its cause was not helped by an underpowered Renault power-unit, the French manufacturer having to revert to its 2016-spec MGU-K following reliability issues.

While Renault will introduce an upgrade in Spain in May, it is in Canada, in June, the Red Bull expects the most significant step forward.

"There's a lot of work to do," Helmut Mark told Autosport. "The race speed makes us think positively, but from our side there is a lot to do… and Renault's side as well.

"Montreal is their biggest step," he added. "Something smaller is coming in Barcelona, but there's a reasonable step in Montreal."

Asked if the upgrade will be enough to see the Austrian team take the fight to Mercedes and Ferrari, Marko said: "We hope so, if we improve our chassis dramatically as well. Our engineers think so, and the simulations say so also."