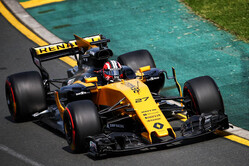 Renault Sport Formula One Team completed the first official practice sessions of the 2017 season with Nico Hulkenberg and Jolyon Palmer taking the R.S.17 out on the 16-turn, 5.3km Albert Park Circuit. Nico had a trouble-free day, setting the ninth fastest lap time, a 1min 25.478secs. In contrast, Jolyon was denied significant track time due to a CV boot replacement in FP1, then an accident in FP2.

Nico Hulkenberg: "I would say it's been a pretty reasonable first Friday of the season and we've got a decent base to work from. We made some solid progress on balance and set-up and got some understanding of the tyres too. The R.S.17 feels good around Albert Park and we know we can make some progress for tomorrow with everything we've learnt today."

Jolyon Palmer: "Sadly it was a pretty short day for me in terms of time in the car. We had a minor technical issue in the first session then I had an off in FP2, which unlike FP1 required more than one part replacing. I'm not sure exactly what happened and we'll be having a close look at the data. I feel for my crew as they have a decent amount of work to do. Albert Park is a pretty cool circuit and even more so in these latest cars. I'm hopeful of more track time tomorrow, but we'll be on the back foot heading into qualifying after only ten laps today."

Nick Chester, Technical Director: "It was great to see the R.S.17 on track for its first Grand Prix sessions and we've had a productive day. Over Nico's side of the garage, pace was pretty much in line with expectations and we were able to get some decent understanding of where we need to go here in terms of set-up. Jo's FP1 was shortened a little due to a split in a CV boot, and it's unfortunate that he had a shunt in FP2. There's a reasonable amount of work to do to his car but nothing too drastic so we're looking forward to seeing what's possible in our first qualifying session of the season tomorrow."