More pain to come for Ricciardo? 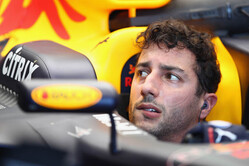 The pain may not be over for Daniel Ricciardo who crashed out during qualifying for tomorrow's Australian Grand Prix.

The local favourite was on a flying lap four minutes into the 12-minute final phase of qualifying when he lost control of the Red Bull at Turn 14, skating across the gravel and colliding with the tyre barrier.

The contact damaged the rear wing, forcing Ricciardo out of the session and drawing the red flag as officials recovered the car.

"I didn't get the impression it was going to go, and then it was like ‘oh yeah, it's going' and I tried to catch it but it was too late.

"I had a quick look now at the replay and the data and I mean I was pushing but I didn't actually enter the corner any quicker than I did in my Q2 lap," he added.

"No excuse but nothing really stood out, I didn't have a problem basically, there was no puncture or anything strange like that, just lost the rear basically.

"I think because we have quite a bit more downforce on the cars as well they are more loaded so when they do go they seem to be a bit harder to bring back."

The car is expected to be repaired for the race, with inspections from the team not revealing any damage to the chassis itself.

There could however be more bad news for Ricciardo, who will start tenth at best after failing to set a time in the final qualifying session.

"The guys are checking out the car but if I do have to change a gearbox that puts me back another five places so it is going to be either tenth or fifteen and both aren't ideal," he conceded.

"I didn't use two sets of ultra-soft in Q2 which means I have new ultra-soft for the race so if I did do a two-stop that would work in my favour perhaps.

"A safety car with around 15 laps to go would be the dream scenario: I put ultra softs on, and I come from, by that stage I might be about eighth by then, so I come from eighth through to third, and then the first two guys get disqualified or something!"