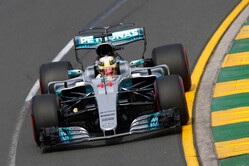 Ahead of today's qualifying session, the air temperature is 30 degrees C, while the track temperature is 36 degrees. Though bright, Race Control claims there is a 40% chance of rain.

Sebastian Vettel topped the timesheets in FP3 earlier - posting the fastest lap ever seen here - but in all fairness most of his rivals failed to get a qualifying run as a result of the red flag that followed Lance Stroll's crash.

That said, it was unlikely that the German's 1:23.380 lap - the fastest ever seen here - would have been threatened, with the Mercedes duo both over 0.47s off the pace - Valtteri Bottas out-pacing his illustrious teammate Lewis Hamilton.

Kimi Raikkonen was fourth ahead of the surprise of the session, Nico Hulkenberg in the Renault.

Not only did the former Force India driver post a very, very impressive 25.063, he out-paced both Red Bull drivers, a fact that will not be lost on the Austrian team.

Neither Red Bull driver has been happy with changes made to their cars this weekend, with Max Verstappen complaining of understeer.

With most drivers missing out on their qualifying sims, and doubt over Vettel's fuel load - though what would Ferrari have to gain from sandbagging at this stage - behind the leaders - and Hulkenberg - Haas and Toro Rosso appear to be best of the rest, followed by Williams, Force India and McLaren.

Stroll's late crash, seemingly the result of youthful overenthusiasm, means a busy lunch break for the Grove mechanics as the Canadian damaged the front and rear suspension. Furthermore, a gearbox change means the youngster picks up the first grid penalty of the year.

After all the talk of "bluffing", "sandbagging" and 21,488 miles of pre-season testing, this where we get to find out who's hot and who's not, certainly for the early part of the season. If nothing else, over the next hour we should learn whether Mercedes really faces a threat this season, and it's fair to say that most hope they do.

In case you missed it, ahead of FP1, Sauber announced that Pascal Wehrlein was withdrawing from the remainder of the weekend, the German youngster not feeling his fitness was good enough for the race. He is replaced by Ferrari's reserve, 2016 GP2 runner-up, Antonio Giovinazzi.

A sad indictment of the state of contemporary F1 being that the official F1 timing app didn't have the Italian flag alongside his name, the nation synonymous with motor racing so woefully unrepresented in the sport these days, certainly in terms of drivers.

Minutes ahead of the green light, the mechanics are still working frantically in the Williams garage on Stroll's car.

Indeed, the lights go green, and Vandoorne gets proceedings underway, followed by his McLaren teammate.

Ericsson, Giovinazzi and Grosjean are the other early risers, no doubt with an eye on the rain warning.

As more drivers head out, all are on ultras bar the Ferrari duo who are on the supersofts.

As Alonso posts 27.745, teammate Vandoorne is told to "box", the Belgian thought to have a fuel flow problem.

Giovinazzi goes second with a 28.204, only to be demoted when Grosjean, Ericsson and then Vettel go quicker, the German posting 25.733.

A mistake in S3 sees Raikkonen abort his lap having been quickest in the first two sectors.

Bottas goes quickest in all three sectors, despite a mistake in the final corner, the Finn crossing the line at 24.514. Moments later Hamilton posts 24.535 to go second.

"You've got new front brakes so be positive," Ricciardo is told.

As Stroll heads out, with eight minutes remaining, Ricciardo posts 25.754 to go fifth.

"I locked the outside rear, I've got a bit of a flat spot" admits Verstappen as he runs wide, meanwhile Hamilton posts 24.191 to go quickest.

Bottas improves with a 24.514 to go second as Raikkonen slips down to tenth. Indeed, the Ferrari driver heads out for another run - on ultras.

On his first flying lap Stroll can only manage 27.143 which puts him 18th of the 18 drivers still to post a time. Still no times from Vandoorne or Palmer.

A vicious excursion for Magnussen in T12 as Giovinazzi looks set to make it to Q2. The Italian is currently 15th.

Raikkonen is unhappy with the rear of his car.

A mistake sees Giovinazzi fail to improve, while a strong lap from teammate Ericsson drops him into the danger zone. A poor final sector from Palmer sees the Briton also miss the cut.

The green light signals the start of Q2, the Mercedes duo first out, both on the ultras. Vettel follows, the German now on the purple-banded rubber also.

The helicopter camera picks up on some very large rain clouds moving in.

With an eye on those clouds, soon there are nine drivers on track.

"Anyone else on used tyres," asks Alonso. He is told that Hamilton was on used rubber - though there is a question mark over that.