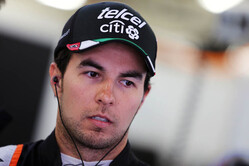 Sergio Perez was today reprimanded failing to adhere to FIA guidelines at the end of Q2.

At the end of the session, in which he failed to make the cut through to Q3, albeit finishing 0.010s quicker than former Force India teammate Nico Hulkenberg, Perez was summoned by the stewards for an alleged breach of Article 27.4 of the Sporting Regulations, by exceeding the maximum time set by the FIA between the Safety Car lines at the end of qualifying, in accordance with the Race Director's Instructions.

Having heard from Perez and a Force India representative, the Stewards deemed that he did exceed the time specified by slightly more than 4 seconds and was not impeded by any other driver and therefore was driving unnecessarily slowly in violation of Art. 27.4 of the Sporting Regulations.

As the Mexican did not impede any other driver, the Stewards considered a reprimand sufficient.

Ironically, shortly before, Perez complained that while on his flying lap he was held up by Felipe Massa who was on a slow-down lap, though the incident was not investigated.

Today's reprimand follows yesterday's naughtiness when the driver - or rather his team, became the first driver of the season to be fined for the pit lane speed limit which is set at 60 km/h for this event. Having been clock at 61.6 km/h, the Mexican cost his team 200 euros.