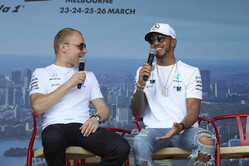 The extra speed from the 2017 cars and tyres meant that the fastest-ever lap of Melbourne was already set in FP3 this morning by Sebastian Vettel and Ferrari, but in qualifying Lewis Hamilton went even quicker for Mercedes on the P Zero Purple ultrasoft tyre. All the teams used the ultrasoft from the start of Q1, apart from both Ferraris. Vettel also completed Q1 on this compound. Track temperatures were 33 degrees centigrade at the end of qualifying, close to the time that the race will also finish, so similar conditions are expected tomorrow.

Mario Isola, Head of Car Racing: "Lap times were around two seconds faster than last year, giving us a competitive and spectacular qualifying. There was low degradation on the compounds used in FPs, which makes a one-stop strategy likely for tomorrow, depending of course on track temperature. If that is higher than data collected during the weekend, this could push it towards two stops. With these cars being so different to the previous generation, and no previous race data to fall back on, tomorrow's strategy is a bit harder to predict than usual."