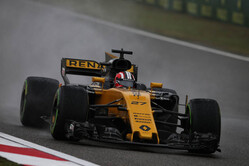 Renault Sport Formula One Team had a quiet start to the Heineken Chinese Grand Prix with low cloud precluding the medical helicopter from being able to fulfil its role, meaning track running was severely curtailed. There was a brief period of running during FP1, however the red flags were soon out again. FP2 saw no running.

In FP1, Pirelli's wet (blue) and intermediate (green) tyres were used by both drivers. Neither driver left the garage in their car during FP2 as running was suspended due to the medical helicopter issue.

Nico Hulkenberg: "Unfortunately there's not much to say about today. I did get one flying lap on the intermediate tyres but that was it. We made a front wing adjustment and I was starting another flying lap when I was caught out and spun at the entry to turn three. Sadly the car ended up in the gravel so that was the end of my session. Running was stopped shortly afterwards due to the helicopter issue so we didn't lose out today. FP2 was a real shame for everyone."

Jolyon Palmer: "In terms of track time we ran faultlessly today; unfortunately the weather circumstances meant it was only for three installation laps. It was pretty slippey-slidey out there, but I was happy with both the wet and intermediate tyres for the limited time I used them. It's a shame for the fans and I'm hoping for everyone's sake that the weather improves tomorrow."

Nick Chester, Technical Director: "There wasn't much learnt today due to the limited track running. It's a shame for the fans who came here to watch, but unfortunately the medical helicopter was unable to fulfil its role, so we were prevented from running. On the plus side, there is less work to be done on the cars overnight. We're hoping for better conditions and more track time tomorrow."