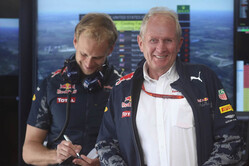 While poor old Ron Dennis appears to have been airbrushed from Planet Paddock history, it's nice to know that somebody still remembers him.

Reflecting on those dark days in 2015 when nobody of note - read Mercedes and Ferrari - was willing to provide Red Bull with an alternative, current-spec engine, the Austrian team approached Honda.

Despite the FIA and Bernie Ecclestone warning of all sorts of repercussions should Red Bull not find an alternative supply, and at a time the Austrian team was threatening - or not - to quit the sport, Dennis jumped in and vetoed any hopes of a deal, insisting that his team had an exclusive agreement with the Japanese manufacturer.

Dennis' stance is something for which Helmut Marko will be eternally grateful.

"I have to say that for the first time I am really grateful to Ron Dennis," he told Motorsport-Total.com, "for having vetoed our Honda ambitions. Otherwise we might have Honda engines.

"The fact that Honda is taking so long to improve is surprising," he added. "I would never have believed it."

No doubt that are a few souls in Woking who wish Ron hadn't vetoed the move, while others probably wish it was McLaren that had taken the Tag-Heuer route.