Vettel: You should be ashamed! 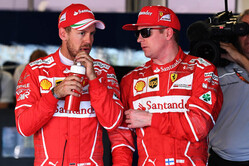 Conspicuous by its absence at the official post-qualifying press conference, the British media 'hack pack' clearly didn't want to hear the thoughts of Messrs Vettel, Raikkonen or Bottas, preferring instead to console Lewis Hamilton on his fourth place grid slot and further pressurise Mercedes into adopting team orders in favour of the Briton.

Meanwhile, the Italian media, just as nationalistic as its British equivalent but not quite as dismissive of Giovanni Foreigner, was questioning the Ferrari duo following the team's first front row lock-out since France 2008.

Bathing in the afterglow of the achievement, Kimi Raikkonen was somewhat taken aback when veteran Italian journo Andrea Cremonesi of La Gazzetta dello Sport went and spoiled it all.

"The only negative, if you can say that it's negative, point of this weekend is that you have to again change the turbocharger and it's the third element. Do you believe that it will be an issue for the end of the season?" he innocently asked.

"You're always very good to always find negative things about us," responded the Finn.

"He's Italian, he should be over the moon," added Vettel, his mischievous side as quick to surface as his lap time.

"Everybody in Italy I'm sure is very happy now and you're the only Italian in the world that finds a reason to be negative. You should be ashamed."

While Kimi remained serious, telling Cremonesi: "It's a planned change and I'm sure we'll be fine with it..." Vettel was on fire. "Maybe I think you will have a great chance to get a German passport because usually Germans always find a reason to complain," he said.

"If there's a hard time when you get back to Italy you're welcome to Germany."