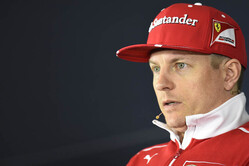 Despite the fact - or perhaps that should be because of the fact - that he is not known for his verbosity, Kimi Raikkonen was the centre of attention in the second part of today's official press conference.

As question after question was levelled at the Finn, Daniel Ricciardo, one of the few drivers who takes these press conferences in his stride and usually plays up to the audience, grinned at the level of attention the Ferrari driver was receiving.

While Ferrari president Sergio Marchionne was somewhat critical of the Finn following the Chinese Grand Prix, claiming that (team boss) Maurizio Arrivabene would be having words, some in the media appear to have missed the fact that a few days later he was congratulating Raikkonen on his efforts in Bahrain.

Unperturbed, the media continued to ask Raikkonen about his relationship with the company president.

"As far as I have spoken to our president, everything is fine," he said. "I know some things were said and written, for me I read so many nonsense stories in newspapers and on the web. I trust much more how my relationship is with the team or with him.

"I expect from myself a good result," he continued, "if other people are not happy that is fine because I'm not either so it's not really a big deal for me."

Brushing aside questions about his rumoured ownership of a Karaoke bar in Finland and whether he likes to sing, the Finn, who is fiercely protective of his life away from the race track, was repeatedly asked about his future, reminded that he is now 37.

"I don't know," he said. "There are always a lot of talks over the years, my first thing is I want to do well. We'll see what happens after this year, it is definitely not the first thing in my mind, it is to do well here and in the next race. Let's see what the future brings, I have a good relationship with my team and it depends on many things."

Asked how he deals with the frustration, and having ignored Daniel Ricciardo's "Karaoke" response, the Finn admitted: "It's a normal story every year and in every race you don't do as well as you hoped for it's never going to be fun or easy. You can look either way. I'm lucky that I've not been in a position where you win all the time, so I'm sort of used to things being like this; on the other way around, you'd rather be in that position as it would be always fun.

"It's very normal stuff, I want to do better and the fact is that if you don't get the results you want then it's never going to be fun. It's always more fun when you have a good result, but we go to the next race and try to do better."

Asked where he thinks there is room for improvement, he said: "I am more happy than I probably was in the first race, in the last race it was pretty good and I was very happy with it. Qualifying was not so much, but the race was good."

Elaborating on qualifying, which is where he appears to be struggling at present, he said: "We just need to make Saturday's better and use our speed.

"We had a pretty average Saturday," he added, referring to Bahrain, "so the starting place was already not good, and a pretty bad first lap, so it was a bit of a bad start. But I got past Felipe at the beginning and had good speed and the safety car was just unfortunate after our pitstop."